Home » THE DIODE AS A CIRCUIT ELEMENT » AC AND DC RESISTANCE

The resistance we calculated in Section 3-2 using the relation t..VIM is called the ac (or dynamic) resistance of tbe diode. It is called ac resistance because we consicer the small change ill voltage, t..V, such as might be generated by an ac generator, causing a change in current, t..l. In using this graphical method to calculate the ac resistance, the .changes t.. V and M must be kept small enough to avoid covering sections of the 1- V curve over which there is an appreciable change in slope. For example, in Figure 3-2 we would not want to calculate ac resistance between V

When analyzing or designing diode circuits, it is often the case that the J- V characteristic curve is not available, In most practical work, the ac resistance of a diode is not calculated graphically hut is found uslng a widely accepted approximation. In virtually every ap-plication where it is necessary to compute the ac resistance of a diode, the de current in the diode has a value somewhere above the knee. It can be shown that when the de current is above the knee, the ac resistance is closely approximated by tn == VI’IJ, where VI’ is the thermal voltage (equation 2.11), md I is the de current in amperes. For T = 300 K, Vr is about 0.026 Y, so at room temperature

This approximation is valid for both silicon and germanium diodes

To illustrate the use of equation 3-6, consider the point shown above the knee on the J- V curve in Figure 3-2. At this point, the de current is 30 mA, so according to equation 3-6, r» = 0.026/(30 x 10-3) = 0.86 fl. This value agrees reasonably well with that we calculated previously using the graphical technique: 0.75 n. There is one additional component of diode resistance that should be mentioned. The resistance of the semiconductor material and the contact resistance where the external leads are attached to the PN junction can be lumped together and called the bulk resistance r» of the diode. Usually less than 1 n, the bulk resistance also changes with the dc current in the diode, becoming quite small at high current levels. The total ac resistance of the diode is ro + rB but at low current levels ro is so much greater than re that rB can usually be neglected. At high current levels, r« is typically on the order of 0.1

When a diode is connected in a circuit in a way that results in the diode being forward biased, there should always be resistance in series with the diode to limit the current that flows through it. The folIowing example ilIustrates a practical circuit that could be used to determine /- V characteristics.

The circuit shown in Figure 3-3 was connected to investigate the relation between the voltage and current in a certain diode. The adjustable resistor R was set to several different values in order to control the diode current, and the diode voltage was recorded at each setting. The results are tabulated in the table in Figure 3-3. 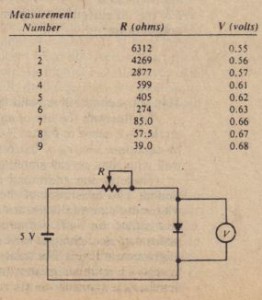 Posted on November 18, 2015 in THE DIODE AS A CIRCUIT ELEMENT