Instead of using resistors in series with the collectors of Qj and Oz in a differential amplifier, many integrated-circuit designsernploy transistors to form active loads for 0\ and 02. Figure 12-23 shows a widely used configuration. He e. PN~ transistors 03 and 04 form a kind of current mirror, bu’t the current in diode-connected 03 is determined by the input signal to 0\. In effect, the current flowing in one side of the differential arnpli ier is reflected to the other. Since 03 acts as a forward-biased diode, the resistance in the collector circuit of 0\ is quite small, and 0\ has a small voltage gain, On the other hand, the resistance in the collector circuit of O~is the large collector output resistance of 04. so the gain of O~ is quite large. For that reason. the amplifier is normally operated single-ended. with output V,,!. Note that there is no phase inversion in the single-ended gain V”2/(Vil – V;2)’

The common-mode rejection ratio of the amplifier in f:igurc 12-23 has been shown to be quite large. Assuming that the transistors arc matched. the hias current I uivtl.ks equariy between both sides, and all devices !liIVI: the same small-signal emitter resistance: . Since the amplifier is not balanced. the analysis to determine its gain is somewhat complex and we will not reproduce it here. It can be shown. however. that the single-ended gain is given 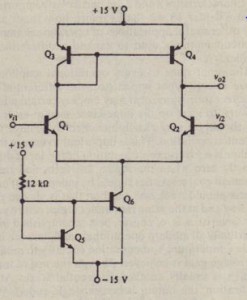 The input stage of every operational amplifier is a differential amplifier. To achieve a large input impedance, the differential stage may be constructed with field-effect transistors, or it may employ certain additional circuitry, such as emitter followers, to increase the impedance seen at each input. Components in the input stage should be very closely matched to achieve the best possible balance in the differential operation. This is important to ensure that the output of the operational amplifier is a precise representation of the input difference voltage, that the output is exactly zero when the inputs are zero, and that the CMRR is large. Ideally,’ component characteristics should be independent of temperature. Any changes that do occur should track one another; that is, device parameters should change in the same way and at the same rate under temperature variations. Matching and tracking of characteristics is, of course, best accomplished in integrated-circuit construction, and virtually all modern operational amplifiers are integrated circuits. Many designs include temperature-compensation circuitry to minimize the effects of temperature. Voltage gain is achieved through the use of multistage amplifiers, at least one of which is usually another differential stage. At some point in the multistage amplification, the output becomes single-ended. We have seen that single-ended gain is one-half the double-ended value. so this conversion results in an undesirable loss of voltage gain ..Some designs incorporate circuitry that eliminates this loss in a clever fashion, but we wiII not take time to detail the somewhat complex theory involved.

To permit the output voltage to swing through both positive and negative values, both a positive and a negative supply voltage are required. ” are usually equal-valued, opposite-polarity supplies, a typical example being ± 15 V. To obtain zero output voltage when the inputs are zero, the amplifier must incorporate {eve/- shifting circuitry that eliminates any nonzero bias voltage that would otherwise appear in the output. Of course, this cannot he accomplished with a coupling capacitor, because we require r1~ response. Level shifting is usually accomplished near or at the output stage.

Posted on November 19, 2015 in INTEGRATED DIFFERENTIAL AND OPERATIONAL AMPLIFIER CIRCUITS