All the small-signal amplifiers we have studied in this book have been designed so that output voltage can vary in response to both positive and negative inputs; that is, the are biased so that under normal operation the output never saturates or cuts off. An amplifier that has that property is called a class-A amplifier. More precisely an amplifier is class A if its output remains in the active region during a complete cycle (one full period) of a sine-wave input signal.

Figure 16-5 shows a typical class-A amplifier and its input and output waveforms. In this case the transistor is biased at Vel: = Vccl2, which is midway between saturation and cutoff and which permits maximum output voltage swing. Note that the output can vary through (approximately) a full Vcc volts peak-to-peak. The output is in the transistor’s active region during a full cycle (360°) of the input sine wave.

The efficiency of a power amplifier is defined to be

The output of a class-A amplifier remains in the action region during a full period” (36l1′) af the input sine wave. In this example the transistor output is biased midway between saturation and cutoff

Note that the numerator of (16-9) is average signal power that is average ac power excluding any de or bias components in the load. Recall that when voltages and currents are sinusoidal average ac power can be calculated using any of the following relations:

where the subscripts P and PP refer to peak and peak-to-peak respectively.

As a consequence of the definition of efficiency (equation 16-9), the efficiency of a class-A amplifier is 0 when n” signal is present. (The amplifier is said to be in standby when no signal is applied to its input.) We will now derive a general expression for the efficiency of the class-A amplifier shown in Figure 16-5. In doing so, we will not consider the small power consumed in the base-biasing circuit i.e. the power at the input side: nR8 + v”.ib• Figure 16-6 shows the voltages and currents used in our analysis. Notice that resistance R is considered to be the load. We will refer to this configuration as a series-fed class-A amplifier and we will consider capacitor-rand transformer-coupled loads in a later discussion.

The instantaneous power from the de supply is

Since the aye rage value of the sine term is 0, the average power from the de supply is

The average signal power in load resistor R is, from equation 16-11,

We see again that the efficiency is 0 under no-signal conditions (lr = 0) and that efficiency rises as the peak signal level J, increases. The maximum possible efficiency occurs when lp has its maximum possible value without distortion. When the bias point is at the center of the load line, as shown in Figure 16-2, the quiescent current is one-half the saturation current, and the output current can swing through the full range from 0 to Veel R amps without distorting (clipping). Thus, the maximum undi :s>~v “,J pea;’ current is also one-half the saturation current:

Substituting (16-17) into (16-16), we find the maximum possible efficiency of the series-fed. class-A amplifier:

This result shows that the best possible efficiency of a series-fed. class-A amplifier is undesirably small: only V. of the total power consumed by the circuit is delivered to the load. under optimum conditions. For that reason. this type of amplifier is not widely used in heavy power applications. The principal advantage of the class-A amplifier is that it generally produces less signal distortion than some of the other. more efficient classes that we will consider later.

Another type of efficiency used to characterize power amplifiers relates signal power to total power dissipated at the collector. Called collector efficiency, us practical significance stems from the fact that a major part of the cost and bulk of a power amplifier is invested in the output device itself and the means used to cool it. Therefore, it is desirable to maximize the ratio of signal power in the load to power consumed by the device. Collector efficiency is defined by

The average power Pc dissipated at the collector of the class-A amplifier in Figure 16-6- is the product of the dc (quiescent) voltage and current:

The maximum value of 11c occurs when Ip is maximum, Ip = lQ = Vcc/2R, as previously discussed. Substituting these values into (16.21) gives

Figure 16-7 shows the output side of a class-A amplifier with capacitor-coupled load RL• Also shown are the de and ac load lines that result. In this case, the average power delivered to the load is

where In is the peak ac load current The average power from the de source is computed in the same way as for the series-fed amplifier: Ps = Vcc1a, so the efficiency is 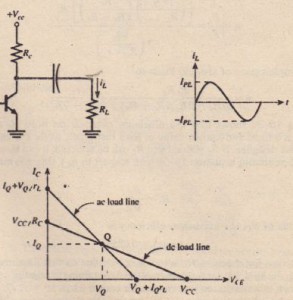 The average ac ‘power in the load resistance RL is then

It is interesting to note that the efficiency under maximum power transfer is somewhat less than what can be achieved (0.0858) without regard to power transfer. In either case the maximum efficiency is substantially less than that attriable in the series-fed class-A amplifier

The class-A amplifier shown in Figure 16-8 is biased at V 12 V. The output voltage is th~ maximum possible without distortion. Find 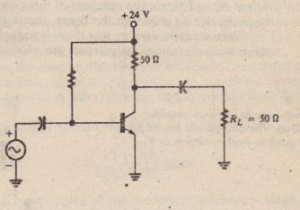 3. The efficiency is less than the theoretical maximum because the bias point permits only a ±6- V swing. As an exercise. find the quiescent value of Vcs that maximizes the swing and calculate the efficiency under that condition.
4. The average power dissipated at the collector is Pc = VQlQ = (12)(0.24) . 2.88 W. Therefore.