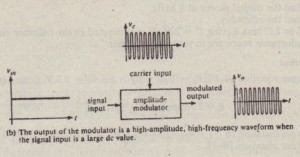 an amplitude modulator when the signal input is a small de value, a large de value, and a low-frequency sinusoidal wave. Notice that the carrier input to the modulator is a constant-amplitude, constant-frequency rf sine wave. It can be seen that the audio waveform is reproduced in the variations of the positive and negative peaks of the output. The audio waveform superimposed on the high-frequency peaks is called the envelope of the modulated wave.

It is important to note that amplitude modulation is achieved by multiplying two waveforms (signal x carrier), which is a nonlinear process. As such, the rnodu lated output contains frequency components that are not present in either the signal or the carrier. Amplitude modulation cannot be achieved by simply adding two wave forms. Unfortunately, the term mixing is used in the broadcast industry to mean both the summation of signals and the multiplication of signals (some modulators are called mixers), but these are two very distinct processes. N« will now demonstrate that amplitude modulation creates new frequency components. Let the input signal be a pure sine wave designated

An amplitude modulator is driven by a 580-kHz carrier and has an audio signal input containing frequency components between 200 Hz and 9.S kHz

1. What range of frequencies must be included in th • passband of an amplifier that” will be used to amplify the modulated signal?
2. What frequency components are in the lower sideband of the AM output? In the upper sideband 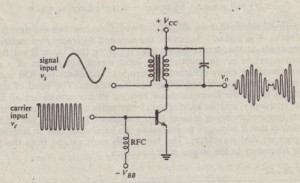