THE EFFECTS OF PARAMETER VARIABILITY

We have seen the values of transistor parameters cannot be treated as a ‘I’ constant. since til eye change with b n temperature and bias conditions. COL’ ” changes in parameter values can change the bias point of a transistor. The pat,.ear fr is a prime example: it increases with temperature as well as with collector current (see Figure 4-47(and an increase in fa in turn causes a further increase in collector current. This last assertion is especially apparent in a bias circuit designed to maintain a constant die base current f in that case the equation Ir- = flu show: that I( increases directly Vito fa. Since we have also seen due the ac performance of a transistor amplifier depends heavily on the locution of tile Point. it is desirable to make the die: bias independent as possible (if the parameters that affect it the most. The committer bias circuit we have been using up to now (Figure 5–32) is very poor in that respect, since it holds base current constant at the value III = (Vex ~ VHF)! R; and thus makes I( directly dependent on the highly variable value of fa: IE = FSF/. A bias circuit That maintains co stutter base current is sometimes called a fixed-bias design. (This terminology is misleading because it implies that the Q-point is lineal, which is most certainly not the case.) Thermal Runaway Another parameter whose variability affects the bins point is the collector-to-base leakage current. ‘(/1(1. Recall that low has a temperature-sensitive component that approximately doubles for every cool rise in temperature. Since the collector current in a CE stage is given by Ir = flan + Velcro ~ {311/ + FDIC/{} (equations 4-9 and 4-10), we see that an increase in /O results in an increase in I.: In modern silicon transistors. which have very small reverse currents, this increase in collector hi as current due to an increase’ in temperature is not usually a serious problem. .t’Y t in some applications involving power transistors. large leakage currents, hi I 1.. creatures, and heavy power dissipation. there is a possibility that a large ch; ‘.~ in It 1/(/ can lead to the destructive phenomenon called thermal rill/away. T:.~ Oil runaway occurs when an increase in I( 1111 causes an increase in IE that in increases  the power dissipation, and hence the temperature, of the collector-base junction. The increase in temperature further increases the value of lasso, which further increases Ir, which further increases the temperature, and so forth, until the dissipation exceeds the rated maximum for the transistor. This headlong plunge toward  is compounded by the fact that increased temperatures also cause {3 to increase: which causes l to increase even more rapidly. If the transistor is biased so that an increase in Ir causes an increase in power dissipation (not alt;rs the case), then thermal runaway is possible. Thermal runaway will not occur in a CE amplifier stage if the bias value of Vi is less than (l/2)See. The reason for this is.that the de power dissipation, P = level is maximum when VCE = Vce/2. An increase in le will result in less power dissipation if VCE is initially less than Vee/2, but greater dissipation if VeE is initially greater than Vee/2. Another temperature-sensitive parameter that affects the bias point to some extent is the DE voltage drop across the base-emitter junction, VBE• VnE decreases approximately 2.5 m V [or each “‘C rise in petroleum bias” circuit, IB = (Vec – VBE)IRB, so a decrease in VBE causes an increase in lB. The increase in IB in turn increases lc: Ie = {sin. In summary, an increase in temperature always increases the d collector current because {3and lcso increase with temperature and because VUE decreases with temperature. 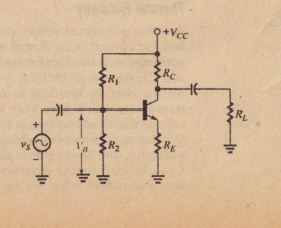 to make the bias point independent of parameter changes by considering its effect on the CE input voltage V’N’ Referring to Figure 6-2, note that V’N = VII – V (“(I-I) where is the emitter-to-ground voltage, and «(1-2) Now, any parameter change that causes to increase will cause to increase by about the same amount. By equation 6-2, an increase in IE causes an increase in VE• But if VB is essentially constant, then equation 6-1 shows that V/N decreases when VE increases. The reduction in V1N reduces IB, which then reduces Ie, thus compensating for the parameter change that tried to increase Ie. Of course, any parameter change that tends to reduce is similarly compensated for by an increase in ‘ In a nutshell, changes in the bias value of Ic automatically change the input voltage in a way that has the opposite effect on , thus tending to restore to its original value. The use of an emitter resistor to stabilize the bias point is called stabilization or current feedbdck.