The workhorse of modern electronic circuits, both discrete and integrated, is the transistor. The importance of this versatile device stems from its ability to produce amplification, or gain, in a circuit. We ..say that amplification has been achieved when a ..  circuits. As a means fOr creating gain. the transistor is in many ways analogous to a small valve in a large water system: By expending a small amount of energy (turning the valve), we arc able to control-s-increase or decrease-a large amount of energy (in the flow of a large quantity of water). When a device such as a transistor is used to create gain, we supply a small. signal to it and refer to that as the input: the large current or voltage variations that then occur at another point in the device are referred to as the output.

The two most important kinds of transistors arc the bipolar junction type and the field-effect type. The bipolar junction transistor (BJT) is so named (N polor=-iwc polarities) because of its dependence on both holes and electrons as charge carriers. We will study the theory and applications of “bipolars” in this and the next chapter. and devote equal time to field-effect transistors (FETs), which. operate under completely different principles. in later chapters. . We should note that bipolars are studied first for historical reasons. and because the theory of these devices follows naturally from a study of PN junctions: Their precedence in our study should in no way infer that they are of greater importance than field-effect transistors. ‘Bipolars were the first kind of transistors to be widely used in electronics, and they are still an important segment of the semiconductor industry. Most people in ·the industry still use the word transistor (as we shall) with the understanding that a bipolar transistor is meant. However. field-effect technology has now evolved to the point where FETs are at least as important as bipolars. and arc. in fact; used in greater numbers than BJTs in integrated circuits for digital applications.

A bipolar junction transistor is a specially constructed, three-terminal semiconductor device containing two PN junctions. It can be formed from a bar of material that has been doped in such a way that it changes from N to P and back to N, or from P to N and back to P. In either case, a junction is created at each of the: two boundaries where the material changes from one type to the other. Figure 4-1 shows the two ways that it is possible to alternate material types and thereby obtain two junctions.

The middle region of each transistor type is called the base of the transistor. Of the remaining two regions, one is called the emitter and the other is called the collector of the transistor. Let us suppose that terminals are attached to each region so that external electrical connections can be made between them. (In integrated circuits, no such accessible terminals may be provided, but it is still possible to
identify the base, emitter, and collector and to form conducting paths between those regions and other internal components.) Figure 4-2 shows terminals attached to the regions of each transistor type. The terminals are labeled according to the region to which they connect

For the sake of clarity, we will continue our discussion of transistor theory in terms of the NPN type only. The underlying theory is equally applicable to the PNP type and can be “translated” for PNPs simply by changing each carrier type mentioned in connection with NPNs and reversing each voltage polarity. To obtain normal transistor action, it is necessary to bias both PN junctions by connecting de voltage sources across them. Figure 4-,3 illustrates the correct bias for each junction in the NPN transistor. In the figure, we show the result of biasing each junction separately. while in practice both junctions will be biased simultaneously by one external circuit, as will be described presently.

As shown in Figure 4-3(a), the emitter-base junction is forward biased by the de source labeled Vr./,. Note that the Negative terminal of V”,: is connected to the N side of the Nl’ junction. as required for forward bias. Consequently, there is a substantial flow of diffusion current across the junction due to the flow of the majority carriers (electrons) from the N-type emitter. This action is exactly that which we discussed in connection with a forward-biased PN junction in Chapter 2. The depletion region at this junction is made narrow by the forward bias. as also described in Chapter 2. The width of the base region is exaggerated in the figure for purposes of clarity. W en the majority dectrons diffuse into the base. they ecome minorit carriers in that P-t e region. e say that minority carnerS11ave Qeen injected into the base.

Figure 4-3(b) shows tfiat the collector-base junction is reverse biased by the dc source labeled Vcc. The Positive terminal of Vel’ is connected to the N-type collector. As a result, the depletion region at this junction is widened, and the only current that flows from base to collector is due to the minority electrons crossing. the junction from the P-type base. Recall from Chapter 2 that minority carriers
readily cross a reverse-biased junction under the influence of the electric field, and they constitute the flow of reverse current in the junction.

Figure 4-4 shows the NPN transistor the way it is biased for normal operation, with both de sources VfE and Vcc connected simultaneously. Note in the figure that the negative terminal of Vcc is connected to the positive terminal of Vn· and that both of these are joined to the base. The base is then the “ground,” or common point of the circuit and can therefore be regarded as being at 0 v. The emitter is n~.iliItive witb res} ‘(‘I In fhe hase, and the collector is ositivc with respect to the base. These are the conditions we require in order to forward bias the criilflcr-basc junction and to reverse bias the collector-base junction 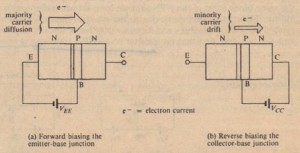 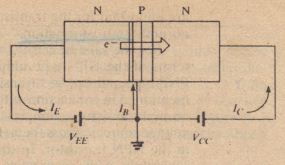 Since the base region is very thin and is lightly doped (so there are relatively few holes in it), very few of the electrons injected into the base from the emitter recombine with holes. Instead, they diffuse to the reverse-biased base-collector junction and are swept across that junction under the influence of the electric field established by Vcc. Relll~ .mber again, that the electrons il’ ted into the base arc the .!!!i it carriers there and that minorit ‘ carriers readily c~ t e r biased junction. We conclude that electron flow conslltufes the dominant ctii’reht type in an NPR transistor. For a PNP transistor, in which everything is “opposite,” ho c t is the dominant type.

Despite the fact that most of the electrons injected into the base ( lSS into the collector, a few of them do combine with holes in the base. For each .cctron that combines with a hol an ele eaves the base re ion via the base terminar.This action creates a very small base current, about ~ or ess of the electron current from emitter to collector. As we shall see, th ‘ ‘r this erccntage, the more lIseful the transistor is in practical applications. =- Note in Figure 4-4 that arrows arc drawn to indicate the ir ‘cli of conuenliol/( il current in the NPN tmnsistor. Of course, each arrow points in the OppOSI c dIrectIOn from the electron trows that we have describe Convention current flowing from Vce into the collector is called collector current and esignate (‘. Similarly, current into the base is I”. the base current, and current from VI:1: into the emitter is emitter current, /1:’ Figure 4-5(a) shows the standard electronic symbol for an NPN transistor, with these currents labeled alongside, Figure 4-5(b) shows the same block form of the NPN that we have shown earlier and is included as an aid for relating the physical device to the symbol. Figure 4-6 shows the standard symbol for a PNR transistor and its equivalent block form. Comparing Figures 4-5 and 4-6, we note first that the emitter of an NPN transistgr is represented by an arrow ponting out from th b se, whereas the emitter of a PNP transistor is shown as an arrow pointing into the base. It is easy to remember this distinction by thinking of the arrow as pointing in the direction of conventional current flow, out of or into the emitter of each type of transistor. We further note that the polarities of the bias sources for the PNP transistor, VEt: and Vcc, are the opposite of those for the NPN transistor. In other words, the positive and negative terminals of each source in Figure 4-0′ arc the reverse of those in Figure 4-5. These polarities arc. of course. necessary ill’ each case \0 maintain the forward and reverse biasing of the junctions, as we have described. Note, for example, that the negative terminal of VI'( is connected to the P-type collector of the PNP transistor. Recapitulating, here is the all-important universal rule for biasing transistors for normal operation (memorize it l): The emitter-bose junction must he forward biased. base junction reverse biased.

Suppose that the external connections between the base and emitter are left open and that the collector -h:ls~ juncuou has its normal reverse bias, as shown ill

Figure 4-8 (See also Figure 4-3(b).). Since the cmutci I~ open, there can he no carriers injected into the base. Consequently, the only current that llows must be that “reverse” component due to thermally generated carriers. This current is designated I(‘I/(), the Collector-to-use current, with the emitter Open. Therefore, in normal operation with the emitter circuit connected. the total collector current can be expressed as

We should also remember that the theoretical value of lceo . like reverse diode current, is usually much smaller than the reverse leakage current that flows across the surface. In silicon transistors, this surface leakage may so completely dominate the reverse current that temperature-related increases in I, remain negligible. In
fact, it is conventional in most texts and product literature to refer to lcso as the (coHector-to-base) leakage current. FinaU)” we should note that in some literature the (unfortunate) notation Ico is used to mean lceo.

Since  is negligibly small in most practical situations, we can set it equal to o in equation 4-4 and obtain the good approximation fe = O’.1c-, or

The emitter current in a certain NPN transistor is 8.4 mA. If 0.8% of the minority carriers injected into the base recombine with holes and the leakage current is 0.1 ftA. find (!) the base current, (2) the collector current, (3) the exact value of 0′.. and (4) the approximate value of 0′., neglecting

Fer the conditions of this example, we see that the exact and approximate values of 0′. are so close that the difference between them can be entirely neglected