A rudimentary low-pass filter used in power supplies consists simply of a capacitor connected ac oss the rectifier output, that is, in parallel with the load, as illustrated in Figure 17-10. Here, we show a simple half-wave rectifier with capacitors that are integer 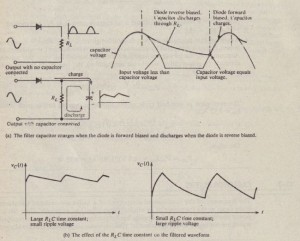 Compares the output waveforms that result when large and small time constants are used. The voltage fluctuation in the filtered waveform is called the ripple voltage, which in most applications should be kept as small as po sible. Figure 17-ll(b) shows that a heavy load (small Rd will result in an undesirably -large ripple voltage.

A full-wave bridge rectifier with a capacitor filter. Also shown is the” form. In this case, positive [.’1/1 t’ are present during every half-cycle of input, so the capacitor voltage does not decay as far a” it does in the half-wave circuit before another pulse is available to recharge it. As a consequence, the peax-to-oeak ripple voltage is smauer, ior a given RLC time constant, than it is in the half-wave circuit.

where VI’H i–the peak value of the rectified waveform in each case. (Note carefully that equations 17-7 and 17-8 give the rms values of the ac components only, not the rms values of the waveforms themselves.) ThenThese ripple values are quite large and demonstrate the need for a Iilter in most power-supply applications. If a filter is not used, or if it is improperly designed, the ac components of the ripple are superimposed on the signal lines in the device that receives power from the supply. Power-supply ripple is therefore a soarce of noise in an electronic system. It is one of the principal causes of 60-Hz ( r 120-Hz) hum in an audio amplifier.We

will now derive an expression for the ripple in the output of a rectifier
having a capacitor filter and load resistance Ri. (Figures 17-11 and 17-12). Since ;\ knowledge of ripple magnitude is important in only those applications where rl; pic affects the performance of a system using the power supply, w e assume that the filter is well designed and that, as a consequence, the ripple voltage is small compared to the de component. In other words, we assume that the capacitor voltage does not decay significantly from its peak value between the occurrences of the rectified pulses that recharge the capacitor. This circumstance is called light loading because the charge supplied to RL by the capacitor is small compared to the total charge stored on the capacitor. To simplify the computations, we can assume that the ripple voltage in a lightly loaded filter is a sawtooth wave, as illustrated. 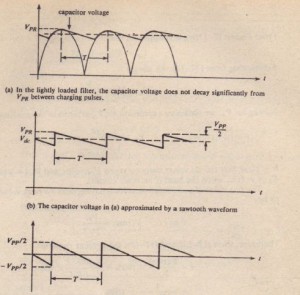 The ripple waveform approximated by a sawtooth voltage with peak-to-peak value V/,/” This approximation is equivalent to assuming that the capacitor charges instantuncolOly and that its voltage decays IinearJy jn.sleao of exponenlj;)JJy. A.f.Iumingtha.<:(ne vo(fage decays linearly is equivalent to assuming that the discharge current is constant and equal to V”..IRI., where Vdc is the de value of the filtered waveform. A~ shown ill (c), the total change in capacitor voltage is VI•I• volts, and this change OCL:lllS over the period of time T. There fore. since ~Q = 11f,

Since T = 1/f,. where f, is the frequency of the fundamental component of the ripple (typically 60 Hz or 120 Hz), equation 17-11 can be writtenIt is clear that the de value cannot exceed VI’R volts, and that it equals V”R when R, = 00 (i.c., when the load is an open circuit).The rills value of a sawtooth waveform having peak-to-peak value VI’/’ is known

Equation 17-18 confirms our previous analysis of the capacitor filler :A large R,.C time constant results in a small ripple voltage, and vice versa. The light-load assumption on which our derivation is based is generally valid for percent ripple less than about 6.5%. From a design standpoint, t he values of I, and R,. are usually fixed, and the designer’s task is to select a value of C that keeps the  ripple below a prescribed value

A full-wave rectifier is operated from a 60-Hz line and has a filter capacitor connected across its output. What minimum value of capacitance is required if the load is 200 n and the ripple must. be no greater than 4%?

1. We must first assume that the filter is lightly loaded, then perform the computation based on that assumption, and then verify from the result that the assumption is valid. From equation 17-18,

The full-wave rectifier in Figure 17-6 has RI. = 120 1. A 100-J.LFfilter capacitor is connected in parallel with RI.’ The input is a 60-Hz sine wave .having peak value 30 V. The filter does not satisfy the lightly loaded criterion •-so the equations for approximating the ripple voltage are not applicable. Use SPICE to deterrnind ; the peak-to-peak ripple voltage. 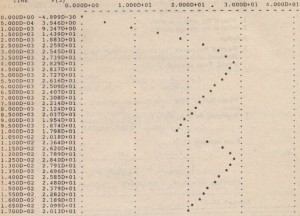