It is clear that class-B operation produces an output waveform that is severely clipped (half-wave rectified) and therefore highly distorted. The waveform by itself is not suitable for audio applications. However, in practical amplifiers, two transistors are operated class B: one’ to amplify positive signal variations and the other to amplify negative signal variations. The ‘amplifier output is the composite waveform obtained by combining the waveforms produced by each class-B transistor. We will study these amplifiers in detail in the”next section because they are more efficient and more widely used in power applications than are class-A amplifiers. An amplifier utilizing transistors that are operated class B is called a class B amplifier 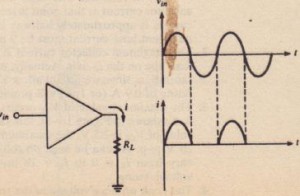