A c1ass-C amplifier is one whose output conducts load current during less than one half cycle of an input sine wave. Figure 16-33 shows a typical class-C current waveform, and it is apparent that the total angle during which current flows is less than 180°. This angle is called the conduction  angle

Of course, the output of a class-C amplifier is a highly distorted version of its input. It could not be used in an application requiring high fidelity, such as an audio amplifier. Class-C amplifiers are used primarily in high-power, high-frequency applications, such as radio-frequency transmitters. In these applications. the high frequency pulses handled by the amplifier are not themselves the signal but constitute what is called the carrier for the signal, The signal h. transmitted by varymg tl e amplitude of the carrier, using the process called amplitude modulation (AM).

The signal is ultimately recovered in a receiver by nltcnng out the carrier frequen y. The principal advantage of a class-C amplifier is that it has a very high efficiency, as we shall presently demonstrate.Figure 16-34 shows a simple class-C amplifier with a resistive load. ote that the base of the NPN transistor is biased by a negative voltage, – Voo, connected through a coil labeled RFC. The RFC is a radio-frequency choke whose inductance presents a high impedance to the high-frequency input and thereby prevents the de source from shorting the ac input. For the transistor to begin conducting, the input must reach a level sufficient to overcome both the negative bias and the 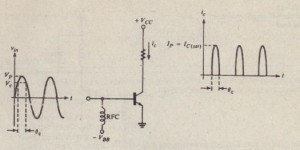 A class-C amplifier witli resistiue load. The transistor conducts when

where V, is the input voltage at which the transistor begins to conduct. As shown in the figure, the transistor is cut off until ViII reaches Vo then it conducts, and then it cuts off again when Vi;’ falls below V,. Clearly, the more negative the value of VOR, the shorter the ccnduction interval. In most c\ass-C applications, the amplifier is designed so that the peak value of the input, V”, is just sufficient to drive the’ transistor into saturation, as shown in the figure. The conduction angle 8e in Figure 16-34 can be Iound from

Figure 10-35 shows the class-C amplifier as it is normally operated, with an LC’tank network in the collector circuit. Recall that the tank is a resonant network whose center frequency, assuming small coil resistance, is closely approximated by

The purpose of the tank is to produce the fundamental component of the pulsed, class-C waveform, which has the same frequency as ViII’ The configuration is called a tuned amplifier, and the center frequency of the tank is set equal to (tuned to) the input frequency. There are several ways to view its behavior as an aid in understanding how it recovers the fundamental frequency. We nJay regard the tank as a highly selective (high-Q) filter that suppresses the harmonics in the c\ass-C waveform and passes its fundamental. We may also recall that the voltage gain of the transistor equals the impedance in the collector circuit divided by the emitter 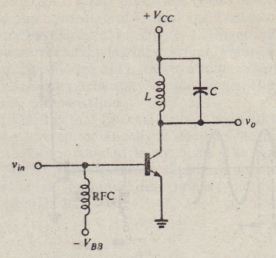 Let ‘u be the ratio of the dc value of the class-C waveform to its peak value. The value of ‘II can be found from

The efficiency of a class-C amplifier is large because ‘v ‘ry little power is dissipated when the transistor is cut off, and it is cut off during most of every full cycle of input. The output power at the fundamental frequency under maximum. drive conditions is

where I/, is the peak output (collector) current. The average power supplied by the de source is Vcc times the average current drawn from the source. Since current . flows only when the transistor is conducting, this current waveform is the same as . the class-C collector-current waveform having peak value 1. Therefore

The efficiency is then

A class-C amplifier has a base bias voltage of -5 V and Vcc = 30 V. It is determined that a peak input voltage of 9.8 V at 1 MHz is required to drive the transistor to its saturation current of 1.8 A.

1. Find the conduction angle.
2. Find the output power at 1 MHz.
3. Find the efficiency. I
4. If an LC tank having C = 200 .pF is connected in the collector circuit, find the inductance necessary to tune the amplifier.

This result demonstrates that a very high efficiency can be achieved in a cIass-C amplifier.