We have mentioned that the source of electrical charge available to establish current in a conductor is the large number of free electrons in the material. Recall that an electron is freed by acquiring energy typically heat energy that liberates it from a parent atom. Electrons are freed in semiconductor materials in the same way but a greater amount of energy is required on the average because the electrons are held more tightly in covalent bonds. When enough energy is imparted to an electron to allow it to escape a bond we say that a covalent bond has been ruptured.

It is instructive to view the electron liberation process from the standpointof the quantity of energy possessed by the electrons. The unit of energy  that is conventionally used for this purpose is the electron volt (eV), which is the energy acquired by one electron if it is accelerated through a potential difference of one volt. One eY equals 1.602 X 10-19 joules (J). According to modern quantum theory an electron in an isolated atom must acquire a very specific amount of energy in order to be freed the amount depending on the kind of atom to which it belongs and the shell it occupies. Electrons in a valence shell already possess considerable energy because a relatively small amount of additional energy will liberate them. Electrons in inner shells possess little energy, since they are strongly attracted to the nucleus and would therefore need a great deal of additional energy to be freed. Electrons can also move from one shell to a more remote shell, provided they acquire the distinct amount of energy necessary to elevate them to the energy level represented by the new shell. Furthermore, electrons can lose energy, which is released in the form of heat or light, and thereby fall into lower energy shells. Free electrons, too, can lose a specific amount of energy and fall back into a valence shell.

When atoms are in close proximity, as they are when they are interlocked to form a solid material, the interactions between adjoining atoms make the energy levels less distinct. In this case, it is possible to visualize a nearly continuous energy band, and we refer to electrons as occupying one band or another, depending on their roles in the structure. Energy bond diagrams are shown in Figure 2-3. Free . electrons are said to be in the conduction band because they are available as charge carriers for the conduction of current. Valence-band electrons have less energy and are shown tower in the energy diagram. The region between the valence and conduction bands is called <I forbidden band, because quantum theory docs not permit electrons to possess energies at those particular levels. The width of the forbidden band is the energy gap that electrons must surmount to make the transition from valence band to conduction band. Note in Figure 2-3(a) that a typical insulator has a large forbidden band, meaning that valence electrons must acquire a great deal of energy to become available for conduction. For example, the energy gap for carbon is 5.4 eY. Energy gaps for semiconductors depend on temperature. As shown in Figure 2-3, the room-temperature values for silicon and germanium are about 1.1 eY and 0.67 eY, respectively. The energy gap for a conductor is quite small (sO.01 eY) or nonexistent, and the conduction and valence bands are generally considered to overlap.

As might be surmised from the foregoing discussion, the number of free electrons in a material, and consequently its electrical conductivity, is heavily dependent on temperature. Higher temperatures mean more heat and therefore greater electron energies. At absolute zero (-273°C, or 0 K), all electrons have zero energy. But as the temperature is raised, more and more electrons acquire sufficient energy to cross the gap into the conduction band. For a semiconductor, the result is that conductivity increases with temperature (resistance decreases), which means that a semiconductor has a negative temperature coefficient of resistance. Although the number of conduction-band electrons in a conductor also increases with tempera- , ture, there are so many more of these than in a semiconductor that another effect predominates: their number becomes so vast that they collide frequently and interfere with each other’s progress when under the influence ‘of an applied electric potential. The increased heat energy imparted to them at higher temperatures also makes their motion more erratic and compounds the problem. Consequently, it becomes more difficult to establish a uniform flow of charge at higher temperatures resulting in a positive temperature coefficient of resistance for conductors.

What really distinguishes electrical current in a conductor from that in a semiconductor is the existence in the latter of another kind of charge flow. Whenever a covalent bond in a semiconductor is ruptured. a hole is left in the crystal structure by virtue of the loss of an electron. Since the atom that lost the electron now has a net positive charge (the atom becomes what is called a positive ion), we can regard that hole as representing a unit of positive charge. The increase in positive charge is, of course, equal to the decrease in negative charge, i.e.•the charge of one electron: qt’ = 1.6 X 1O-‘~ coulombs (C). If a nearby valence-band electron should now enter the hole, leaving behind a new hole, then the net effect is that a unit of positive charge has moved from the first atom to the second. This transfer of a hole from one atom to another constitutes a flow of (positive) charge and therefore represents a component of electric current, just as electron flow contributes to current by the transfer of negative charge. We can therefore speak of hole current in a semiconductor as well as electron current. Figure 2-4 illustrates the concept.

Figure 2-4 illustrates the single repositioning of a hole, but it is easy to visualize still another valence electron entering the new hole (at B in the figure), causing the hole to move again, and so forth, resulting in a hole path through the crystal. Note that holes moving from left to right cause charge transfer in the same direction as electrons moving from right to left. It would be possible to analyze semiconductor current as two components of electron transfer. but it is conventional to distinguish between conduction-band electron flow and valence-band hole flow. Here is an 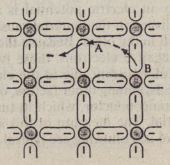 important point that is worth repeating, because it is a source of confusion to students and is not emphasized enough in most textbooks: Hole current occurs at
the valellce-band level, because valence-band electrons do not become free electrons when they simply move from atom to atom. Electron current always occurs in the conduction band, and involves only the flow of free electrons. If a conduction-band electron falls into a hole (which it may), this does not constitute current flow; indeed, such an occurrence is a cancellation of charge, and wc say that a hole-electron pair has been annihilated, or that a recombination has occurred. Since charge transfer can take place by the motion of either negatively charged electrons or positively charged holes. we rcfer to electrons and holes collectively as charge carriers. Note that hole current does not occur in a conductor.

At room temperature. the charge carrier densities for germanium and silicon are approximately II, = Pi = 2.4 X lOll} carricrs/rn’ for germanium and IIi = Pi = \.S X 10Ih carriers/in’ for silicon. These figures seem to imply vast numbers of carriers per cubic centimeter, but consider the fact that a cubic centimeter of silicon contains more than lOll atoms. Thus, there are approximately 1012 times as many atoms as there are carriers in silicon. Consider also that the conductor copper contains approximately 8.4 X 102M carriers (free electrons) per cubic meter, a carrier density that is immensely greater than that of either germanium or silicon. Note that the carrier density of germanium is greater than that of silicon because the energy gap, as shown in Figure 2-3, is smaller for germanium than for silicon. At a given temperature, the number of germanium electrons able to escape their bonds and enter the conduction band is greater than the number of silicon electrons that can do likewise.

When an electric potential is applied across a semiconductor, the electric Held established in the material causes free electrons to drift in one direction and holes to drift in the other. Because the positive holes move in the opposite direction from the negative electrons, these two components of current add rather than cancel. The total current due to the electric field is called the drift current. Drift current depends, among other factors, on the ability of the charge carriers to move through the semiconductor. which in turn depends on the type of carrier and the kind of material. The measure of this ability to move is called drift mobility and has the symbol J1-. Following are typical values for hole mobility (J1-I’) and electron mobility

Thus, the units of conductivity are 1/(0 . m)’, or siemens/meter (S/m). The conductivity of a semiconductor can be computed using

Note that it is again possible to identify a component of conductivity due to electrons and a component due to holes.

Under certain circumstances another kind of current besides drift current can exist in a semiconductor. Whenever there’ is a concentration of carriers (electrons or holes) in one region of a semiconductor and a scarcity in another, the carriers in the high density region will migrates toward the low density region, until their distribution becomes more or less uniform. In other words, there is a natural tendency for energetic carriers to disperse themselves to achieve a uniform concentration. Visualize, in an analogous situation, a small room crowded with people who are constantly squirming, crowding, and elbowing each other; if the room were suddenly to expand to twice its size, the occupants would tend to nudge and push each other outward as required to fill the new space. Another example of this natural expansion of energetic bodies is the phenomenon observed when a fixed quantity of gas is injected into an empty vessel: The molecules disperse to fill the confines of the container. During the time that carriers are migrating from the region of high concentration to the one of low concentration, there is a transfer of charge taking place, and therefore an electric current. This current is called diffusion current, and the carriers are said to diffuse from one region to another. Diffusion is a transient (short-lived) process unless the region containing the higher concentration of charge is continually replenished. In -many practical applications that we will study later, carrier replenishment does occur and diffusion current is thereby sustained .