Many general-purpose power supplies are equipped with short-circuit or overload protection. One form of protection is called current limiting, whereby specially designed circuitry linuts the current that can be drawn from the supply to a certain specific maxirnum, even if the output terminals are short-circuited. Figure 17-32 shows a popular current-limiting circuit incorporated into the operational-amplifier regulator. As load current increases, the voltage drop across resistor Rsc increases. Notice that Rsc is in parallel with the base-to-emitter junction of transistor O2, If the load current becomes great enough ~ ) create a drop of about 0.7 V across R.K, then 02 begins to conduct a substantial collector current. As a consequence, current that would otherwise enter the base of 01 is/diverted through O~.[I)  this way, the pass transistor is prevented from supplying additional load current. The maximum (short-circuit) current that can be drawn from the supply is the current necessary to create the 0.7-V drop across Rsc:

Example 17-13demonstrates that the output voltage of a current-limited regulator decreases if the load resistance is made smaller than what would draw maximum current at the regulated output voltage. Figure 17-33 shows a typicalload-voItageload- current characteristic for a current-limited regulator. The characteristic shows that load current may increase slightly beyond h(max) as the output approaches a short-circuit condition (VI. = 0). Note that O2 in Figure 17-32 supplies a small amount of additional current to the load once’ current limiting takes place. 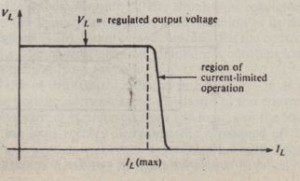 Another form of overcurrent protection, called foldback limiting, is used to reduce both the output current and the output voltage if the load resistance is made smaller than what would draw a specified maximum current, h(max). We have already seen that the output voltage of a current-limited regulator decreases as the load resistance is made smaller (Example 17-13). In foldback limiting, this decrease in output voltage’ is sensed and is used to furthc:’ decrease the amount of current that . can flow to the load. Thus, as load resistance decreases beyond a certain minimum, both load voltage and load current decrease. If the load becomes a short circuit, output voltage and output current both approach O.The foldback characteristic is shown in Figure 17-34. The principal purpose of foldback is to protect a load from overcurrent, as well as to protect the regulator itself.

Notice that VR will increase or decrease if the load voltage increases or decreases. When the load current increases to its maximum permissible value, VR becomes large enough to make VBii’ approximately 0.7 V; that is, VR, becomes la!ge enough to exceed the drop across VR by about 0.7 V: 0.7 “””VilE {.>Rsc- VR . At this point, current limiting occurs, just ~s it does in the current-limited regulaJtor. If the load resistance is now made smaller, the load voltage will drop, ‘as we have seen previously. But when the load voltage drops, VR3 drops. Consequently, by equation
17-44, a smaller value of VRsc is required to maintain VBii’ == 0.7 V. Since V Bf: remains essentially constant at 0.7 V, a smaller load current must flow to produce the smaller drop across RJ• Further decreases in load resistance produce further drops in load voltage and a further reduction in load current, so foldback limiting occurs. If the load resistance is restored to its normal operating value, the circuit resumes normal regulator action.