The objective of using a current source in biasing is to establish a constant quiescent current l., and hence a constant in another transistor used as an amplifier. This objective is accomplished using the current mirror shown in Figure 0-29. In the figure, a current source producing constant current I is shown connected to transistor 01, whose collector is shorted to its base. 01 is a diode-connected transistor. We will show that the current I is essentially reproduced (mirrored. or reflected) in the collector of Q2, meaning that the bias of 02 is set and maintained by the constant-current source. We assume that 01 and 02 are fabricated on’ the same chip and are therefore closely matched. Since the base-emitter junctions of 01 and 02 are in parallel, the value of VHE is the same for each transistor. Since the transistors are matched, the equal values of £ produce equal values of h. Again because of matching, 01 and O! have the same {3and therefore the same base current. Recall that 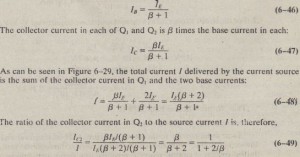 Assuming that /3 is large, the quantity 1/(1 + 21/3) is approximately equal to 1, meaning (hat Integrated,Circuit Bias Techniques I (6-5/1)
This analysis shows that the source current I is closely mirrored in the collector of Note that the emitters of 01 and 02 could both be connected to a voltage source instead of ground without changing this result.Assuming that /3 = 150, find the (I) approximate and (2) exact values of Ie and Ver in the circuit shown in Figure 6-30.Solution 1. The current mirror makes Ie approximately equal to the value of the constant current source: Ie = 3.1 mA. Therefore, Vo: …, 12 – (3.1 mA)(2.4 kfl) =:= 4.56 V. 2. The exact value of Ie (assuming exactly matched transistors) is found from equation 6-49:

A single current source can be used with a current mirror to set the bias for numerous amplifier in the same integrated circuit. The next example illustrates this point.Find the approximate value or VC/: in each of 01, O2• and 0.1 in Figure 6-31. Salutation. The current source is mirrored in each of 01, 02, and 0). Therefore, 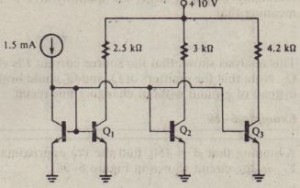 When current mirroring is used to bias several transistors from a single current source, each collector current is actually somewhat smaller than it would be if the mirror were applied to just one transistor. The greater the number of transistors, the smaller the collector current in each. It is easy to show that the ratio of any
collector current, lc, to the source current, I, is given by where 1/ is the total number of transistors biased from a single source. If f3 is large and 1/ is not too large, then the ratio given by (6-51) is still close to 1. Exercise 6-41 requires the derivation of equation 6-51 for the case 11 = 3. Example 6- J 2 Use PSpice to find Yo: in Qh Q2, and Q3 of Figure 6-31. Assume the f3 of all transistors is 200 and let the other parameters default. Solution. The PSpice circuit and input circuit file are shown in Figure 6-32. Note that the collector-to-emitter voltage (Vcd of each transistor is the same as the collector-to-ground voltage (Vd of each, so the PSpice .PRINT statement can
request VC(Q I). VC(Q2). and VC(Q3) to obtain those values. Execution of the program reveals that vqQ 1) = 6.324 Y, YC(Q2) = 5.5XX Y, and YC(Q3) = 3)Q4 Y. These differ somewhat from the approximate values calculated in Example 6-11 but agree very closely with theoretically exact values calculated using equation

Because of the extensive use of current mirrors in integrated circuits, a different convention is sometimes used in schematic diagrams to show transistors having their base terminals connected together, such as those in Figure 6-31. The horizontal line representing the base terminal is extended through the vertical bar of the symbol so that base Conner .ions can be conveniently shown on both the right and left sides of the transistor. Figure 6-33 shows how the circuit of Example 0-1/ (Figure 6-31) could be redrawn using this convention. The diode-connected transistor is also frequently shown on schematics using just a diode symbol. Of course, the current-mirroring techniques we have discussed can also be used in discrete circuits. However, good current mirroring requires the use of well matched transistors. which makes it a less practical and more expensive alternative in discrete circuits. 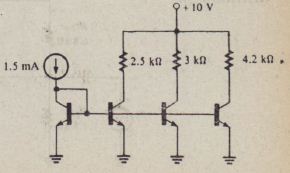