DIGITAL TO ANALOG AND ANALOG TO DIGITAL CONVERTERS Electronics Help

An analog voltage is one that may vary continuously throughou, some range. For example, the output of an audio amplifier is an analog ,. I. ~ ‘f)at may have any valucI of an infinite number of values) between its minimum and maximum voltage limits. Most of the devices and circuitry we have studied in this book arc auurog in nature. In contrast, a digital voltage has only two useful values: a “low” and a “high” voltage, such as 0 V and +5 V. Digital voltages are used t\! represent n ruerical values in the binary number system, which has just-the two digits 0 and I. For example, four digital voltages having the values 0 V. +5 V, II V. +5 V would represent the binary number 0101. which equals 5 in decimal. Digital computers perform computations using binary numbers represented by digital voltages.

Most physical variables in our environment die analog in nature. Quantities such as temperature, pressure, velocity, weight, etc., can have any of an infinite number of values. However, because of the high speed and accuracy of digital systems, such as computers, it is frequently the case that the transmission of data representing such quantities a ,d computations performed on them arc operations that arc hest accomplished using digital equivalents of analog values. Two modern examples of functions that have traditionally been analog in nature and that are now performed digitally include communications systems using fiber-optic cables and music reproduction using compact disks. Converting an analog value to a
digital equivalent (binary number) is called digitizing the value. An analog-todigital converter (ADC, or AID converter) performs this function. Figure 19-I(a) illustrates the operation of an ADC. After a digital system has transmitted, analyzed, or otherwise processed digital data, it is often ~ecessary to convert the results of such operations back to analog values. This function is performed by a digital-toanalog converter (DAC, or D/A converter). Figure 19-1 (b) illustrates the operation of a DAC. Figure 19-I(c) shows a practical example of a system that incorporates both an ADC and a DAC. In this example, an accelerometer mounted on a vihration table (used to test components for vibration damage) produces an analog voltage proportional to the instantaneous acceleration of the table. The analog voltage is

(a) The ADC converts a 6-V analog input to an equivalent digital output. (The binary number 01 j( is equivalent to decimal 6.)

(c) Example of an instrumentation system thai uses an analog-tc-digital converter and a digital-to-analog converter,

converted to digital form and transmitted to a computer, which call ulates the instantaneous velocity of the table (hy mathematical integration: II = J u lit). The digital quantity representing the computed velocity is then converted by a OAt’ to an <II ‘Ii ‘6 voltage, which becomes the input to an analog-type velocity meter.

As an aid in understanding subsequent discussions on digital-to-analog and analogto-digital converters we present here for review and reference purposes a brief summary of the mathematics used to convert binary numbers to their decimal equivalents.

As in the decimal number system, the position of each digit in a binary number carries a certain weight. In the decimal number system. the weights arc powers of 10 (the units position: WI = 1. the tells position: 101 = 10, the hundreds position: \O~ = toO, and so Iorih). In the binary number system, each position carries ,1 weight equal [0 a power of 2: 2(1= I, 21 = 2, 21 = 4, 2′ = R, and so forth, A binai y digit is called a bit, so a binary number consists of a sequence of bits, each of which can he either 0 or I, The rightmost bit in a binary number carries the least weight and is called the least significant bit (LSB). If the binary number is an integer (whole number), the LSI3 carries weight 2° = 1, and ~ch bit to the left of the LSB has a weight equal to a power of 2 that is one greater than the weight of the bit to its right. To convert a binary number to its decimal equivalent, we compute the sum of all the weights of the positions where binary Is occur. The following is an example 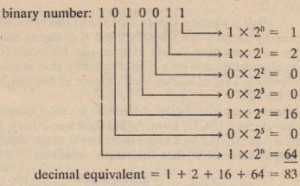 The leftmost bit in a binary number is called the most significant bit (MSB). An easy way to convert a binary numher to its decimal equivalent is to write the values of the powers of 2 (I, 2. 4. g, … ) above each bit. beginning with the LSB and proceeding through the MSn. Then we simply add those powers where Is occur. For example:

If a binary number has a fractional part, then abil/ary point (like a decimal point) separates the integer part from the fractional part. The powers of2 become negative and descend as we move right past the binary point. The following is an example:

A binary counter is a device Whose ‘binary output is numerically equal to the number of pulses that have occurred at its input. For example, the output of a 4-bit binary counter would be 01 \0 after 6 pulses had occurred at its input. The’ input pulses often occur at a fixed frequency from a signal calIed the system clock. The largest binary number that a 4-bit counter can contain is 1111. or decimal 15. (The counter resets to 0000 after the sixteenth pulse.) Thus. the total number of binary numbers that a 4-bit counter can produce is (counting OOeO) 16. O( 24. The tot~1 number of binary number- that can be represented by 11 bits is 2n. 111e counter we have just described is called an lip-counter because its binary output increases by 1 (increments) each time a new clock pulse occurs. In a down-counter, the bin iry output decreases by 1 (decrements) each time a new clock pulse occurs. Thus tl.e sequence of outputs from a 4-bit down-counter would be 1111, 1110, 1101, . 0000, 1111

A latch is a digital device that stores the value (0 or 1) of a binary input. It is especially useful when a binary input is changing and we want to “latch onto” its value at a particular instant of time-as, for example, when performing ~ digitalto- analog conversion of a digital quantity that is continuously changing in value. A register is a set of latches used to store all the bits of a digital quantity, one latch for each bit.

Some analog-to-digital converters produce outputs that are in 8-4-2-1 binary coded- decimal (BCD) form, rather than true binary. In 8-4-2-\ BCD, each decimal digit is represented by 4 bits. For exampic, if the input to an ADC having this type of output were 14 V, then the output would be

Note that this type of output is quite different from true binary. (The number 14 i:, binary is 1110.)

A digital-to-analog converter having a 4-bit binary input produces only 24 = 16 different analog output voltages, corresponding to the 16 different values that can be represented by the 4-bit input. The output of the converter is, therefore, not truly analog, in the sense that it cannot have an infinite number of values. I(the input were a 5-bit binary number, the output could have 25 = 32 different values. In short, the greater the number Of input bits, the greater t~(! ;;.:.mb”‘r of output values and the closer the output resembles ‘a true analog quantity. Resolution is a measure of this property. The greater the resolution of the DAC, the finer the increments between output voltage levels

The most popular method for.converting a digital input to an analog output incorporates a (adder nerworx cOIl(ain(ngseries-pcmrNdcamai(lIUia(lsa{ two resistor Pali1es: Rand 2R. Figure 19-2 shows an’ example of an R-2R ladder having a 4-bit digital input.

To understand the operation of the R-2R ladder, let us first determine the output voltage in Figure 19-2 when the input is 1000. We will assume that a logical-I input is E volts and that logical 0 is ° V (ground). Figure 19-3(a) shows the circuit with input D3 connected to E and all other inputs connected to ground 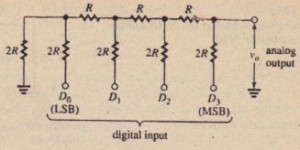 corresponding to the binary input 1000. We wish to find the total equivalent resistance R”I’ looking to the left from node A. At the left end of the ladder, we see that 2 R is in parallel with 2 R, so that combination is equivalent to R. That R is in series with another R, giving 2R. That 2R is in parallel with another 2R, which is equivalent to R once again. Continuing in this manner, we ultimately find that Rfq = 2R. In fact, we see that the equivalent resistance looking to the left from every node is 2 R. Figure 19-3(b) shows the circuit when it is redrawn with R,q replacing all of the network to the left of node A. Figure 19-3(c) shows an equivalent way to draw the circuit in (b), and it is now readily apparent that u” = E/2. 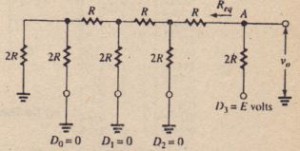 (b) The circuit equivalant to (a) when the network to the lefl of node B i5 replaced by  equivalent circuit to the left of the bracketed arrows is shown in (c).

(c) The Thevenin equivalent circuit to the left of node A.

Typical values for Rand 2 Rare 10 kn and 20 kn. For accurate conversion, tbe output voltage from the R-2 R ladder should be connected to a high impedance to’ prevent loading. Figure 19-6 shows how an operational amplifier can be used for that purpose. The output of the ladder is connected to a unity-gain voltage follower, whose input impedance is extremely large and whose output voltage is the same as its input voltage.