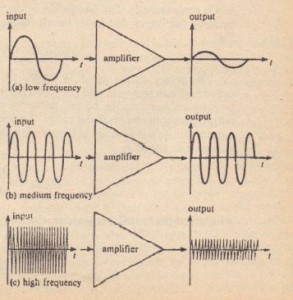 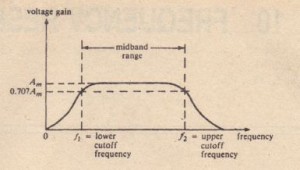 The points on the graph in Figure 10-2 where the gain is O.707A,. are often called half-power points, and the cutoff frequencies are sometimes called half-power frequencies, because the output power of the amplifier at cutoff is one-half of its output power in the range. To demonstrate this fact, suppose that an output voltage v is developed across R ohms in the range. Then the output power in midband is An audio amplifier has a lower cutoff frequency of 20 Hz and an upper cutoff frequency of 20 kHz. (This is the frequency range of sound waves-the audio frequency range.) The amplifier delivers 20 W to a 12-12 load at 1 kHz.
1. What is the bandwidth of the amplifier?
2. What is the rms load voltage a 20 kHz?
3. What is the rms land voltage at 2 kHz?
Solution
1. BW = f2 – f, = 20 X 103 Hz – 20 Hz = 19,980 Hz
2. Since 1 kHz is in the midband range, the midband power is 20 W. At the 20-kHz  cutoff frequency, the power is Y2(20) = 10 W, so 3. Assuming that the load voltage is exactly the same throughout the midband range (not always the case in practice), the output at 2 kHz will be the same as that at 1 kHz, and we can use equation 10-2 with P = 20 W to solve for v. Alternatively, the midband voltage equals the voltage at cutoff divided by 0.707:

The signal passed through an ac amplifier is usually a complex waveform containing many different frequency components rather than a single-frequency (“pure”) sine wave. For example, audio-frequency signals such as speech and music are combinations of many different sine waves occurring simultaneously with different amplitudes and different frequencies, in the range from 20 Hz to 20 kHz. As another example, any periodic waveform. such as a square wave or a triangular wave, can be shown to be the sum of a large number of sine waves whose amplitudes and frequencies can be determined mathematically. In previous discussions, we have analyzed ac amplifiers driven by single-frequency, sine-wave sources. This approach is justified by the fact that signals of all kinds can be regarded as sums of sine waves, as just described, so it is enough to know how an amplifier treats any single sine wave to know how it treats sums of sine waves (by the superposition principle). In order for an output waveform to be an amplified version of the input, an amplifier must amplify every frequency component III the signal by tile same amount.  For example, if an input signal is the sum of a O.S-V 100-Hz sine wave, a 0.2-V-rms, I-kl-lz sine wave, and a O.7-V-rms, 10-kHz sine wave, then an amplifier having gain 10 must amplify each frequency component by 10, so that the output consists of a 5- v-rrns. lOO-Hz sine wave, a 2·V-rms. 1-kHz sine wave.zand a 7-V-rms,  10-kHz sine wave. If the frequency response of an amplifier is such that the gain.