When Ilw wm! “!dhiltly ‘,! used ill “/,1 ncction with. a high-gain amplifier. it usually means the property of behaving like an amplifier (ather than like an os .illau»: An osci lutor is H, device that .pontaneously generates an ac signal because of positive. feedback. We will st udy oscillator theory in Chapter 14, but for now it is sufficient to know that oscillations are easily induced in high-gain.we’ r  amplifiers, due to positive feedback. that occurs through reactive clements, As WI! ri.llUW. an operational amplifier has very high gain, so precautions must be taken in its design to ensure that it does not oscillate, i.e., to ensure that it remains stable. Large gains at high frequencies tend to make an amplifier unstable because those properties enable positive feedback through stray capacitance.

Any device whose gain falls Off like that of a single RC network is said to have a single-pole frequency response, a name derived from advanced mathematical theory. Beyond a certain very high frequency, the frequency response of an operational amplifier exhibits further break frequencies. meaning that the gain falls off at greater rates. but for most practical uualysis purposes we can treat the umplilicr as if it had a single-pole response,

Figure 13-15 shows a typical frequency response characteristic for the open-loop gain of an operational amplifier having a single-pole frequency response, plotted on log-log scales. We use f~to denote the cut off frequency, which, as usual. 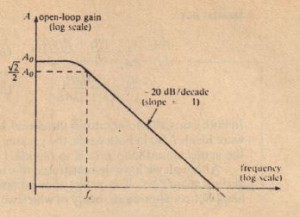 The significance of the gain-bandwidth product is that it makes it possible for us to compute the bandwidth of an amplifier when it is operated in one of the more useful closcu-loop conllgurutions. Obviously, a knowledge of the upper-frequency -lirniuuion of a certain amplifier configuration is vital information when designing it for a particular application. The relationship between closed-loop bandwidth (8W(I.) and the gain-bandwidth product is closely approximated

Each of the amplifiers shown in Figure 13-·16 has an open-loop, gain-bandwidth product equal to I x lOC’. Find the cutoff frequencies in the closed-loop configurations shown .

It is worthwhile noting that in the case of the  amplifier, the fact that the ideal dosed-loop gain is 1/{3 makes equation 13-33 equivalent

Figure 13-17 shows a typical set of frequency response plots for a non inverting amplifier, as the gain ranges from its open-loop value of lOs to a closed-loop value of 1. This figure clearly shows how the bandwidth decreases as the closed-looped gain increases. Notice that the bandwidth at maximum (open-loop) gain is only 10 Hz. 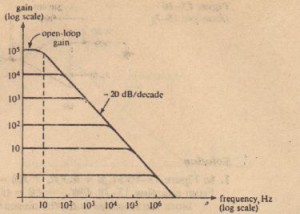 W-ith reference to the amplifier whose frequency response is shown in Figure 13-17, find
Example