High-Frequency Response of BJT Amplifiers Figure 10-32 shows a common-emitter amplifier having interconnection capacitance designated and C Since we arc now considering high-frequency performance the emitter bypass capacitor effectively shorts the emitter terminal to ground so are input-to-ground and output-to-ground capacities respectively W can apply the general equations developed earlier to determine the upper cutoff frequency due to the inter electrode capacitance. 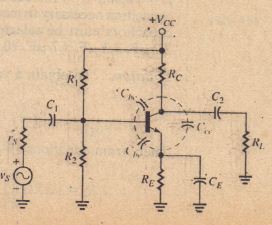 connected between the input (base) and output (collector) of the common-emitter configuration. The cutoff frequency due to the output shunt capacitance is where C = C,’> + Chc(1 – VAu) and ro = ro(stage) Rc. Any wiring or stray capacitance that shunts the input or output must be added to CA or CB As mentioned in an earlier discussion, the high-frequency performance of a transistor is affected by certain internal characteristics that mayor may not limit
the upper cutoff to a frequency less than that predicted by equations 10-47 or 10-48. The 13 of a BJT is frequency dependent and its value begins to drop at the rate of’ 20 dB/decade at frequencies beyond a certain frequency called the beta cutoff frequency,. By definition, ffJ is the frequency at which the 13 of a transistor is 0/2 times its low-frequency value. Figure 10-33 shows a plot of 13 versus frequency as it would appear on log-log paper. The low- (or rnid-) frequency value of 13 is designated 13m. If ffJ is significantly lower than Ji( CA) and Ji( CB), then the .upper cutoff frequency of an amplifier in the common-emitter configuration will be determined by f If the frequency is increased beyond, continues to decrease until it eventually reaches a value of 1. As shown in Figure 10-33 the frequency at which f3 = 1 is designated fro Note that the symptom’s slope of -20 dB/decade is the same as a slope of -1 on log-log scales, since 20 dB is a ten-to-one change along the vertical
axis and a decade is a ten-to-one change along the horizontal axis. Therefore, in Figure 10-33, the difference between the logarithms of 13m and 1 must be the same as the difference between the logarithms of fr and Since 13 decreases with frequency, we would expect a to do the same. This is, in fact, the case, and the frequency at which a falls to V2/2 times its low-frequency value is called the alpha cutoff frequency, fa. Because fa is generally much larger than the common-base amplifier is not as frequency limited by parameter cutoff . as is the common-emitter amplifier. A commonly used approximation is In specification sheets, IT is often called the gain-bandwidth product. We will discuss this interpretation of a unity-gain frequency in Chapter 13. In terms of
internal junction capacitance, [r can be found from where C. is the base-to-emitter junction capacitance and CI’ is the base-to-collector
junction capacitance. Recall that junction capacitance depends on the width of the depletion region, which in turn depends on the bias voltage. Since r, also depends on bias conditions, fr is clearly a function of bias and is usually -so indicated on specification sheets.The transistor in Figure 10-34 has a low-frequency f3 of 120, r, = 20 n, r; = 100 k, and fr = 100 MHz. The inter electrode capacitance are Cbe = 40 pF, Cbe = 1.5 pF, and C=5 pF. There is wiring capacitance equal to 4 pF across the input and 8 pF across the output. Find the approximate upper cutoff frequency. Solution. To determine the Miller-effect capacitance, we must find the midland voltage gain of the transistor. Note that the overall voltage gain is not used in this computation, because the gain reduction due to voltage division at the input does not affect the Miller capacitance. (It would, if the feedback capacitance were connected all the way back to us.) 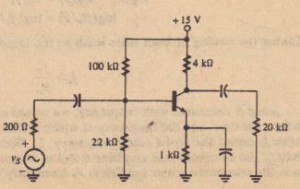 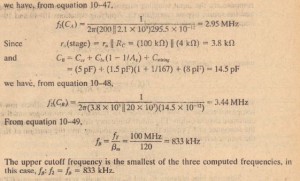 -Since the base amplifier is non inverting, the shunt capacitance <It its input docs not have a Miller-effect component. Therefore, the CB an r as severely limited as its CE counterpart in terms of the upper  to 2(CA), and CB amplifiers are often used in high-frequency application We will ‘discuss one such application, the castle amplifier, in Chapter 11. We have also noted that /., is generally much higher than J,J’ The common-collector amplifier (emitter follower) is also non inverting and unaffected by Miller capacitance. It, too, is generally superior to the CE configuration for high-frequency applications