As already mentioned, it is not practical to bias integrated-circuit BJT amplifiers using resistor-capacitor’ networks, as is the practice in discrete circuits. In the'[first place, the coupling and bypass capacitors in those designs are far too large to be constructed in a monolithic . For that reason, most IC amplifiers arc amplifiers,
meaning both direct-coupled and direct-current, i.e., there are no coupling capacitors to restrict the lowest frequency at which they can be operated. Second, a go. d ‘discrete bias circuit requires 3 or 4 resistors per transistor. Since integrated-circuit resistors are more expensive, more difficult to construct, and more space consuming than IC transistors, the discrete designs are again inappropriate.

Integrated-circuit designers use transistor-diode combinations instead of resistors to provide, bias for’ transistor amplifiers. They also take advantage of the fact that transistors and diodes fabricated on the same chip are well matched, due to having been created by the same diffusion processes. For example, the voltage drops across  all forward-biased PN junctions’ in one chip are nearly equal and tend to {rack each other with temperature (i.e., increase or decrease by the same amount as temperature changes.. The fundamental bias circuit in an IC is a de constant-current source, a transistor circuit that provides nearly constant current (0 a load. Often only one such circuit is constructed in a monolithic IC and its characteristics are reflected to numerous loads using current “mirroring,” which we will discuss presently. 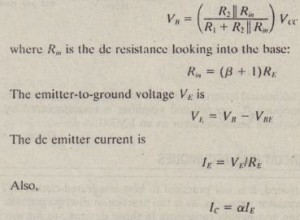 The important point to notice in equation 6-45 is that tile resistance Rc does not appear. In other words. the current Ie that flows through Rc does not depend on the value of Re. If we regard R(, as a de load resistance. then we have a device that behaves like a constant-current source: the current flowing through the connected
load does not change when the load is changed. It is important to remember that equation 6-45 is valid only so long as the transistor is operated in its active region. Therefore. the range of values of load resistance R(, for which the transistor can serve as a constant-current source is limited by the requirement that the collector-to-ground voltage Vc satisfy VcV/J. To be a good current source. the value of the constant current (fc) should depend as little as possible 011 the values of {3and Vlib and hence not he affected by changes
in {3and VIII-.· caused by temperature variations. Since is the quiescent current in the circuit, the same criteria that we discussed for good Q-point stability apply to the constant-current source. Recall that good stability is achieved by making RL as large as possible. The trade-off is that large values of R£ reduce the value of the constant current that can be maintained.1. Determine the value of the current in the constant-current source shown in Figure 6-27.
2. What is the largest value of Rc that could be used in this circuit without affecting its operation as a current source?

transistor circuit shown in Figure n-EH is an example. However, the most common practice is to refer to both configurations as current sources, as we will do hereafter.