MOSFET devices of the VMOS design (Figure 7-47) are becoming a popular choice for power amplifiers, particularly those designed to switch large currents on and off’,Examples include line drivers for digital switching circuits, switching-mode voltage regulators (discussed in Chapter 17), and class-D amplifiers, which we will discus presently. One advantage of a MOSFET switch is the fact that turn-off time is not delayed by minority-carrier storage, as it is in a bipolar switch that has been driven ‘lee ply into saturation. Recall tha i current in field-effect transistors is due to tne i’Jowof majority carriers only. Also, MOSFETs are not susceptible to thermal  like bipolar transistors. Finally, a MOSFET has a very large input impedance Which simplifies the design of driver circuits.

Figure 16-38 shows a simple, class-A audio amplifier that uses a VN64GA VMOS transistor to drive an output transformer. Notice that the driver for the output stage is a JlOXJFET transistor connected ill a common-source configuration. Also notice the feedback path between the transformer secondary and the input to the JFET driver. This negative feedback is incorporated to reduce distortion, as discussed earlier. The amplifier will reportedly deliver between 3 and 4 W to an 8-0 speaker with less than 2% distortion up to 15 kHz.

MOSFET power amplifiers are also constructed for class-B and class-All operation. Like their bipolar counterparts, these amplifiers can be designed without the 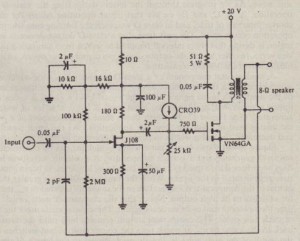 A two-stage, class-A audio amplifier with 1I VMOS output transistor (Courtesy of Incorporated} 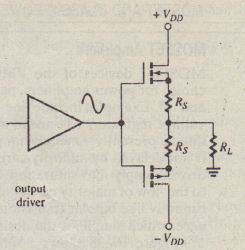 A class-D amplifier is one whose output is switched on and off, that is, one whose output isin it” linear range for essentially zero time during each cycle of an input sine wave. As we progress through the letters designating the various classes of operation, A, B, C, and 0, we see that linear operation occurs for shorter and shorter” intervals of time, and in class D we reach the limiting case where no linear operation occurs at all. The only time that a class-D output device is in its linear region is during that short interval required to switch from saturation to cutoff, or vice versa. In other words, the output device is a digital power switch, an application ideally suited for VMOS transistors. . A fundamental component of a class-D amplifier is a pulse-width modulator, which produces a train of pulses having widths that arc proportional to the level of the ampliflcr’s input signal. When the signal level is small, a series of narrow pulses is generated, and when the input level is large, it series of wide pulses is generated. (See Figure 17-39, which shows some typical outputs of a pulse-width modulator used in a voltage-regulator application.) As the input signal increasesand decreases, the pulse widths increase and decrease in direct proportion. Figure 16-40 shows how a pulse-width modulator can be constructed using a sawtooth gel/em/or and a voltage comparator. A sawtooth wuvctonn is one that rises linearly and then quickly switches buck to its low level. to begin another linear rise, as illustrated in the figure. When the sawtooth voltage is greater than Vit” the output of the comparator is low, and when the sawtooth falls below l'”” the comparator switches to its high output. Notice that the comparator must switch high each time the sawtooth makes its vertical descent. These time points mark the beginning ofeach new pulse. The comparator output remains high until the sawtooth rises back to the value of Vi/!, at which lime the comparator output switches low. Thus the width of the high pulse is directly proportional to the length of time it takes the sawtooth to rise to Vi/!, which is directly proportional to the level of Vi/!. As shown in the figure. the result is a series of pulses whose widths arc proportional to the level of Vi/!. Notice that the peak-to-peak voltage of the sawtooth must exceed the largest peak-to-peak input voltage for successful operation. Also, the frequency 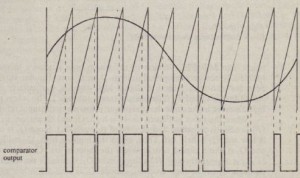 The pulse-width modulator drive’ the output stage of the class-D amplifier, causing it to switch on and off as the pulses switch between high and low, Figure 16-41 shows a popular switching circuit. called a totem pole, used to drive heavy 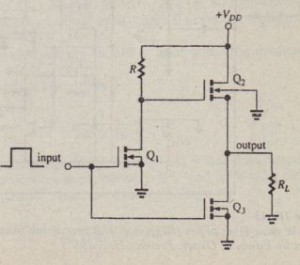 loads. The MOSFET version of the totem pole is shown in the figure, because MOSFETs are generally used in class-D amplifiers. Bipolar versions of the totem pole are also widely used in digital logic circuits, particularly in the integratedcircuit family called TTL (transistor-transistor logic). The totem pole shown in the figure inverts, in the sense that the output is low when the input is high, and vice versa. When the input in Figure 16-41 is high, 01 and 03 are on, so the output is low (RL is effectively connected to ground through 03), Since 01 is on, the gate of 02 is low and O2 is held off. Thus, when the input is high, 02 is like an open switch and OJ is like a closed switch. When the input is low, 01 is off and a high voltage ( oo) is applied through R to ‘he gale of O2, turning it on. Thus, RL is connected through 02 to the high level V[)n. Since 03 is also off, n low input makes 03 an open switch and 02 a closed switch. The advantage of this arrangement is that the 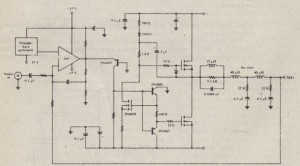 Like the class-C amplifier, 3 class-D amplifier must have a filter to extract-or recover, the signal from the pulsed waveform. Howev r, in t, is case the signal may have many frequency components, so a tank circuit. which resonates at a single frequency, cannot he used. Instead, a low-pass filter having a cutoff frequency near the highest signal ‘requency is used. The low-pass filter suppresses the highfrequency components of the pulse train and, in effect, recove.rs the average value of the pulse train. Sit ce the average value of the pulses depends on the. pulse widths, the output of the filter is a waveform that increases and decreases as the pulse widths increase and decrease, that is, a waveform that duplicates the input signal,Vin Figure 16-42 shows a block diagram of a complete class-D amplifier, including negative feedback to reduce distortion.

The principal advantage of a class-D amplifier is that it may have a very high efficiency, approaching 100%. Like that of a class-C amplifier, the high efficiency is due to the fact that the output device spends very little time in its active region, so power dissipation is minimal. The principal disadvantages are the need for a very good low-pass filter and the fact that high-speed switching of heavy currents generates noise through electromagnetic coupling, called ‘electromagnetic interference

A class-D audio amplifier is to be driven by a signal that varies between :5 V The output is a MOSFET totem pole with VDD ;; 30 V.

1. What minimum frequency should the sawtooth waveform have?
2. What minimum peak-to-peak voltage should the sawtooth waveform have, assuming that the input is connected directly to the voltage comparator?
3. Assume that the amplifier is 100% efficient and is operated at the frequency found in (1). What average current is delivered 10 an 8-0 load when the pulsewidth modulator produces pulses that are high fof2.5 p.s?

1. The nominal audio-frequency range is 20 Hz to 20 kHz, and the sawtooth waveform should have a frequency equal to at least 10 times the highest input frequency, i.e., 10(20 kHz) = 200 kHz.
2. The peak-to-peak sawtooth voltage should at least equal the maximum peakto- peak input voltage, which is 10 V.
3. The period of the 200-kHz sawtooth is