Recall that intrinsic semiconductor material has the same electron density as hole density: n, = p.. In the fabrication of semiconductor materials used in practical applications, this balance between carrier densities is intentionally altered to produce materials in which the number of electrons is greater than the number of holes, or in which the number of holes is greater than the number of electrons. Such .matcrials arc called extrinsic (or impure) semiconductors. They are called impurr because, as we will discuss presently, the desired imbalance is achieved by introducing certain impurity atoms into the crystal structure. Materials in which electrons predominate are called N-type materials, and those in which holes predominate arc called Pstype materials.

Let us first consider how N-type material is produced. Suppose that we are able, by some means, to insert into the crystal structure or a semiconductor an atom that has 5 instead of 4 electrons in its valence shell. Then 4 of those 5 electrons can (and do) participate in the same kind of covalent bonding that holds all the other atoms together. In this way, the impurity atom becomes an integral part of the structure, but it differs from the other atoms in that it has one “excess” electron. Its fifth valence electron is not needed for any covalent bond. Figure 2-6 illustrates how the structure of a silicon crystal is modified by the presence of one such impurity atom. An impurity atom that produces an excess electron in this way is called a donor atom, because it donates an electron to the material. The nucleus of the donor atom is labeled D in Figure 2-6. When a large number of donor atoms are introduced into the material, a correspondingly large number of excess electrons are created. Materials used as donor impurities in silicon include antimony, arsenic, and phosphorus.

Extrinsic semiconductor material is said to have been doped with impurity atoms, and the process is called doping. The impurity material is called a dopant. In Chapter 6 we will discuss various ways in which doping is accomplished. Since the silicon material illustrated in Figure 2-6 has been doped with donor atoms and therefore contains an excess of electrons, it now constitutes N-type material. Note that the electrons arc in “excess” only in the sense that there are now more electrons than hr les; the material is still electrically neutral, because the number of protons in each donor nucleus still equals the total number of electrons that the donor atom brought to the material. Each excess electron is, however, very loosely bound to a donor atom and is, for all practical purposes, in the conduction band. 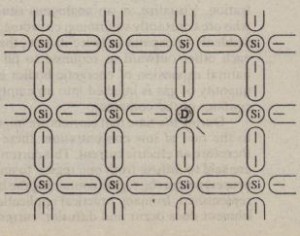 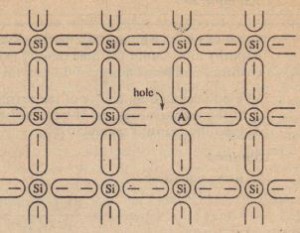 The donor atom itself therefore becomes a positive ion. In all subsequent computations, we will assume that all impurity atoms are thus ionized

P type material is produced by doping a semiconductor with impurity atoms that have only three electrons in their outermost shells. When this kind of impurity atom is introduced into the crystal structure, an electron deficiency results, because the impurity atom contributes only three of the required four electrons necessary for covalent bonding. In other words, a hole is created everywhere the impurity
atom appears in the crystal. Such impurity atoms are called acceptors, because the holes they produce can readily accept electrons. Figure 2-7 shows a single acceptor’ atom in a silicon crystal. Materials used for doping silicon to create P-type material include aluminum, boron, gallium, and indium. Note once again that P-type material, like N-type, is electrically neutral because the electron deficiency exists only in the sense that there arc insufficient electrons to complete all covalent bonds

Equation 2-X states that the product of electron and hole densities equals the square of the intrinsic electron density. Since n, ;:;Pi, equation 2-8 is, of course, ‘ equivalent to np = pJ = n.p.. All of the theory we have dili”ussed so far in connection with mobility. conductivity, and current density is applicable to extrinsic as well ~ intrinsic semiconductors. The carrier densities used in the computations are often found using equation 2-8.

Note in the preceding example that the conductivity. 68 Still. i. for all practical purposes determined exclusively by the component of the conducn ity due !O holes. which a-e II c majority car iers in this case. In practice. this is almost alwavs the case: TI t! conductivny esseritially de end only on the ;,1j ‘it: carrier density, This result ;” uti •.. \d <I pneuornenon called minority ccr •.iPrwr pression. To illustrate. ‘iUppOSC that Ihe majority carriers’ re electrons, and that there are suostanriatly more clcctronsthnn holes. Under these conditions. there is an increased probability that an electron-hole recombination (annihilation) will occur, thus eliminating both a free electron and a hole. Since there are very many more electrons than holes. u e resultant percent decrease 10 electrons is much less than the percent decrease ;’1 holes. This effective suppression of minority carriers is reflected in equation 2-8 and leads to the following valid in most practical cases. for computing conductivity:

When one carrier type has a substantial majority. it is apparent from these equations that the conductivity of a semiconductor increases in direct proportion to the degree or doping with impurity atoms that produce the majority carriers.

THE PN JUNCTION
CURRENT IN SEMICONDUCTORS