As the name implies, a power amplifier is designed to deliver a large amount of power to a load. To perform this function, a power amplifier must itself be capable of dissipating large amounts of power; that is, it must be designed so that the heat generated when it is operated at high current and voltage levels is released into the surroundings at a rate fast enough to prevent destructive temperature build up. Consequently, power amplifiers typ,~ally contain bulky components having large surface areas to enhance heat transfer t-9 the environment. A power transistor is a discrete device with a large surface area and a metal case, characteristics that make it suitable for incorporation into a power amplifier.

A power amplifier is often the last, or output, stage of an amplifier system. The preceding stages may be designed to provide voltage amplification, to provide buffering to a high-impedance signal source, or to modify signal characteristics in scrne predictable way, functions that are collectively referred to as signal conditioning. The output of the signal-conditioning stages drives the power amplif ,which in turn drives the load. Some amplifiers are constructed with signal-co stages and the output power stage all in one integrated circuit. Others, especially those designed to deliver very large amounts of power. have a hybrid structure, in the sense that the signal-conditioning stages are integrated and the power stage is discrete.

Because a power amplifier is required to produce large voltage ·and current variations in a load, it is designed so that at least one of its semiconductor components, typically a power transistor, can be operated over substantially the entire range of its output characteristics, from saturation to cutoff. This mode of operation is called large-signal operation. Recall that small-signal operation occurs when the range of current and voltage variation is small enough that there is no appreciable change in device parameters, such as {3 and r., By contrast, the parameters of a large-signal amplifier at one output voltage may be considerably different from those at another output voltage. There are two important consequences of this fact:

1. Signal distortion occurs because of the change in amplifier characteristics with signal level. Harmonic distortion always results from such nonlinear behavior of an amplifier (see Figure 5-16). Compensating techniques, such as negative feedback, must be incorporated into a power amplifier if low-distortion high level outputs are required.
2. Many of the equations we have developed for small-signal analysis of amplifiers are no longer valid. Those equations were based on the assumption that device parameters did not change, contrary to fact in large-signal amplifiers. Rough approximations of large-signal-amplifier behavior can be obtained by using .average parameter values and applying small-signal analysis techniques. However, graphical methods are used more frequently in large-signal-amplifier design

As a final note on terminology, we should mention that the term large-signal operation is also applied to devices used in digital switching circuits. In these applications, the output level switches between “high” and “low” (cutoff and saturation), but remains in those states most of the time. Power dissipation is therefore not a problem. Either the output voltage or the output current is near 0 when a digital device is in an ON or an OFF state, so power, which is the product of voltage and current, is near 0 except during the short time when the device switches from one state to the other. On the other hand, the variations in the output level of a power amplifier occur in the active region, between the two extremes of saturation and cutoff, so a substantial amount of power is dissipated.

Transistor manufacturers specify the maximum permissible junction temperature and the maximum permissible power dissipation that a transistor can withstand. As we shall presently see, the maximum permissible power dissipation is specified as a function of ambient temperature (temperature of the surroundings the rate at which heat can be liberated from the device depends on the temperature of the region to which the heat must be transferred. Most of the conversion of electrical energy to heat energy in a bipolar junction transistor occurs at the junctions. Since power is the product of voltage and current, and since collector andemitter currents are approximately equal, the greatest power dissipation occurs at the junction where the voltage is greatest. In normal transistor operation, the collector-base junction is reverse biased and has, on average, a large voltage across it, while the base-emitter junction has a small forward-biasing voltage. Consequently, most of the heat generated in a transistor is produced at the collector-base junction. The total power dissipated at the junctions is

Equation 16-1 gives, fOT” all practical purposes, the total power dissipation of the transistor.

For a fixed value of P«, the graph of equation 16-1 is a hyperbola when plotted on Ic – VCE axes. Larger values of P, correspond to hyperbolas that move outward from the axes, as illustrated in Figure 16-1. Each hyperbola represents all possible comhinations of Vel, and lc that give a product equal to the same value of PIt. The figure;shows sample coordinate values Uc, Vet:) at points on each hyperbola. 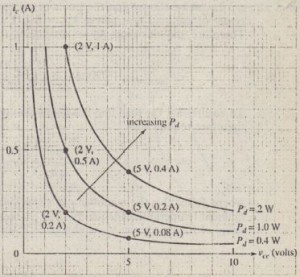 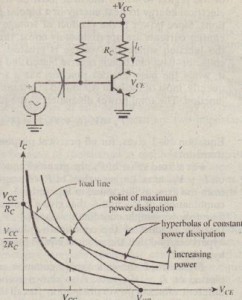 Therefore the maximum power dissipation is

To ensure that the load line lies below the hyperbola of maximum dissipation, we therefore require that

where P(max) is the manufacturer’s specified maximum dissipation at a specified ambient temperature. Inequality 16-3 enables us to find the maximum permissible value of Rc for a given Vcc and a given PAmax):

I. What maximum power dissipation rating should the transistor have?
2. If an increase in ambient temperature reduces the maximum rating found in (1) bv a factor of 2, what new value of Rc should be used to ensure safe operation?