The term power supply generally refers to a source of de power that is itself operated from a SOL rce of ac power, such as a 120-V, 60- Hz line. A power supply of this type can therefore be regarded as an ac-to-de converter. A supply that produces constant-frequency, constant-amplitude, ac power from a de source is called an’ inverter. Some power supplies are designed io operate from a de source and to produce power at a different de level; these are called de-to-de converters.

A de power supply operated from an ae source consists of one or more of the following fundamental eomronents:
1. A rectifier that converts an ac voltage to a pulsating de voltage and permits  current to flow in one direction only;
2. A low-pass filter that suppresses” the pulsations in the rectified waveform and passes its de (average value) component; and
3. A voltage regulator hat maintains a substantially constant output voltage under variations in the load current drawn from the supply and under variations in line voltage.

The extent to which each of the foregoing components is required in a given supply, and the complexity of its design, depend entirely on the application for which the supply is designed. For example, a de supply designed exclusively for service as a battery charger can consist simply of a half-wave rectifier. No filter or regulator is required, since it is necessary to supply only pulsating, unidirectional current to recharge a battery. Special-purpose, fixed-voltage supplies subjected to little or no variation in current demand ~an be constructed with a rectifier and a large capacitive filter, and require no regulator. On the other hand, devices such as operational amplifiers and output power amplifiers require elaborate, wcll-reguiatcd supplies. Power supplies arc classified as regulated or unregulated and as adjustable or lixcd . Adjustable supplies arc generally well regulated and are used in laboratory applications for general-purpose experimental and developmental work. The most demanding requirement imposed on these supplies is that they maintain” an extremely constant output voltage over a wide range of loads and over a continuously adjustable range of voltages. Some fixed-voltage supplies are also designed so that their output can be adjusted, but over a relatively small range, to permit periodic recalibration.

In ChapterB (Section 3-6), we showed how a single diode performs half-wave recti! cation. The circuit and the half-wave-rectified waveform developed across load  The average (de) and rrns values of a half-wave-rectified· sine-wave voltage.

Assuming that the ac voltage is a sym.netrical sine wave. the. diode in Figure 17-1 must be capable of withstanding a peak reverse voltage of VI” volts, since that is the rnaximur reverse biasing voltage that occurs during one com plete cycle. Recall that the peak-inuerse-uoltage (PlY) rating of a diode determines its maximum .permissible reverse bias without breakdown.

the waveform that results when a sine wave is full-wave rectified. In effect. the negative half-cycles of the sine wave are inverted to create a continuous

where Vp is the peak primary voltage, N, is the total number of turns on the primary, and N, is the number of turns between the center tap and either end of the secondary. To determine the maximum reverse bias to which each diode is. ubjected, reier to the circuit in Figure 17-4. Here, we show the voltage drops in the r ectifier when diode DI is forward biased and diode O2 is reverse biased. Neglecting the O.7-V 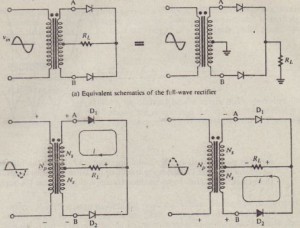 drop across D. , the voltage across Rj is VA volts. Thus the cathode-to-ground voltage of D2 is VA volts. Now, the anode-to-ground voltage of D2 is -V8 volts, as shown in the figure. Therefore, the total reverse bias across Dz is VA + VB volts, as shown. When VA is at its positive peak, V8 is at its negative peak, so the maximum reverse bias equals twice the peak value of either. We conclude that the PlV rating of each 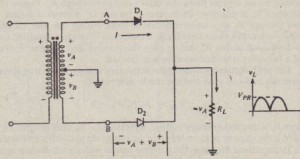 The primary voltage in the circuit shown in Figure 17–5 is 120 V rms, and the transformer has Np: N, = 4: 1. Find
1. the average value ofthe voltage across RL;
2. the (approximate) average power dissipated by RL; and
3. the minimum PIV rating required for each diode