Note in Figure 16-13 that amplifying devices 1 and 2 are driven by equalamplitude, out-of-phase input signals. The signals are identical except for phase. Here we assume that each device conducts only when its input is.positive and is cut/off when its input is negative. The net effect is that device I produces load current when the input is positive and device 2 produces load current, in the opposite direction, when the input is negative. An example of a device that produces output (collector) current only when its input (base-to-emitter) voltage is positive is an NPN transistor having no base-biasing circuitry, that is, one that is biased at C)Jtoff. ~ we shall see. NPN transistors can be used as the output amplifying devices in push-pull amplifiers. However, the circuitry must be somewhat more elaborate than that diagrammed in Figure 16-13 since we must make provisions for load current to flow through a complete circuit, regardless of current direction. Obviously, when amplifying device 1 in Figure 16-13 is cut off, it cannel conduct current produced by device 2. and vice versa.

Figure 16-14 shows a push-pull arrangement that permits current to flow in both directions through a load, even though one or the other of the amplifying devices (NPN transistors) is always cut off. The output transformer shown in the figure is the key component. Note that the primary winding is connected between the transistor collectors and that its center tap is connected to the. dc supply, Vcc.
The center tap is simply an electrical connection made at the center of the winding. so there are an equal number of turns between each end of the winding and the center tap. The figure does not show the push-pull driver circuitry, which must produce out-of-phase signals on the bases of O. and 02. We will discuss that circuitry later. 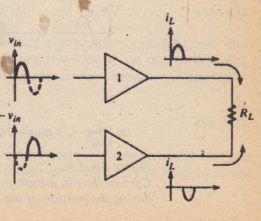 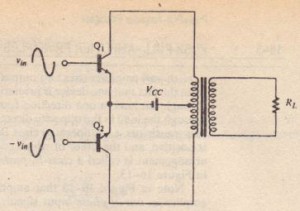 (a) When Vi” is positive Qt conducts and 02 is cut off. A counterclockwise current is induced in the load. 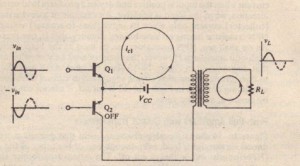 (b) When V in is negative 02 conducts and Q1 is cut off. A clockwise current is induced in the load.

Figure 16-15 shows how current flows through the amplifier during a positive half-cycle of input and during a negative half-cycle of input. In 16-15(a), the input to Q, is the positive half-cycle of the signal and since the input to Q! is out-ofhasewith ‘I)at tLl 0″ Q~ is driven by u negative half-cycle, Notice that neither class-a transistor is biased. Consequently, the positive base voltage on Q, causes it to turn on and conduct current in the counterclockwise path shown. The negative base voltage on Q2 keeps that transistor cut off. Current flowing in the upper half of the transformer’s primary induces current in the secondary, and current flows through the lead. In t 6- t 5(b), the input signal on the base of Q, has gone negative, so its inverse on the base of Ql is positive. Therefore, Q2 conducts current in the
clockwise path shown, and Q, is cut off. Current induced in the secondary winding is in the direction opposite that shown in Figure 16-15(a). The upshot is that current flows through the load in one direction when the input signal is positive and in the opposite direction when the input signal is negative, just as it should in an ac
amplifier.

Figure 16-16 displays current flow in the push-pull amplifier in the form of a timing diagram. Here the complete current waveforms are shown over two full cycles of input. For purposes of this illustration, counterclockwise current (in Figure 16-15) is arbitrarily assumed to be positive and clockwise current is therefore negative. Note that, 1S far as the load is concerned, current flows during the full 3600 of input signal. Figure Ib-16(e) shows that the current iI from the power
supply varies from 0 to the peak value I/’ every half-cycle. Because the current variation is so large, the power supply used in a push-pull amplifier must he particularly well regulated-that is, it must maintain a constant voltage, independent of current demand.

The principal advantage of using a class-B power amplifier is that it is possible to achieve an efficiency greater than that attainable in a class-A amplifier. The improvement in efficiency stems from the fact that no power is dissipated in a transistor during the time intervals that it is cut off. Also like the transformer coupled class-A amplifier there is no external collector resistance that would otherwise consume power.

We will derive an expression for the maximum efficiency of a class-B pushpull amplifier assuming ideal conditions: perfectly matched transistors and zero resistance in the transformer windings. The current supplied by each transistor is a half-wave-rectified waveform, as shown in Figure 16-16. LeI I, represent the peak value of each. Then the peak value of the current in the secondary winding, which is the same as the peak load current, is

where VI’ is the peak value of the primary (collector) voltage. Since the load voltage and load current arc sinusoidal, the average power delivered to the load is, from

As shown in Figure 16-16(e), the power-supply current is a full-wave-rectified waveform having peak value Ip. The de, or average, value of such a waveform is known to be . Therefore, the average power delivered to the circuit by the de supply is

The efficiency is then

Equation 16-47 shows that a class-B push-pull amplifier can be operated with a much higher efficiency than the class-A amplifiers studied earlier. Furthermore, unlike the case of class-A amplifiers, the power dissipated in the transistors is 0 under standby (zei a-signal) conditions because both transistors Me cut off. A general expression (or tl.e total power dissipated in the transistors can be obtained by . realizing that it equals the difference between the total power supplied by the de source and the total power delivered to the load:

Using calculus, it can be shewn that P,t is maximum when VI’ = 2Vccl1T = 0.636Vcc. We conclude that maximum transistor dissipation does not occur when maximum load power is delivered (Vi’ = Vcc), but at the intermediate level Vi’ = 0.636Vcc.

The push-pull amplifier in Figure 16-14 has Vcc”= 20 V and RI. = 10 O. The total number of turns on the primary winding is 100 and the secondary winding has 50 turns. Assume that the transformer has zero resistance

Since 5.46 W is the total power dissipated by both transistors, each· dissipates one-half that amount, or 2.73 W.