We have seen that the push-pull amplifier described earlier must be driven by out of-phase input signals. Figure 16-17 shows how a transformer can be used to provide the required drive signals. Here, the secondary winding has a grounded center tap that effectively splits the secondary voltage into two out-of-phase signals, each having one-half the peak value of the total secondary voltage. The input signal is

applied across the primary winding, and a voltage is developed across secondary teriinals A-B in the usual transformer fashion. To u.rderstand the phase-splitting action, consider the instant at which the voltage across A-B is +6 V, as shown in the figure. Then, since the center point is at ground, the voltage from A to ground must be +3 V and that from B to ground must be -3 V: VAB = VA – VB = 3 —
.( – 3) “‘” +6 V. The same logic applied at every instant throughout a complete cycle show’; that VB with respect to ground is always the negative of VA with respect’ to ground; in other words, VA and VB are equal-amplitude, out-of-phase driver signals, as reqired.

A special.y designed amplifier, called a phase-splitter, can be used instead ofa driver transformer to produce equal amplitude, out-of-phase drive signals. Figure 16-18 shows two possible designs. Figure 16-18(a) is a conventional amplifier circuit with outputs taken at the collector and at the emitter. The collector output is outof phase with the input and the emitter output is in phase with the input, so the two outputs are out of phase with each other. With no load connect..d to either output, the output signals will have approximately equal amplitudes if Rc = RE• However, the output impedance at the collector is significantly greater than that at the emitter, so when loads are connected, each output will be affected differently. As a consequence, the signal amplitudes will no longer be equal, and gain adjust- 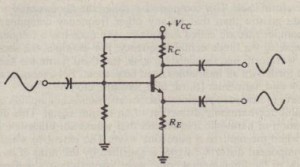 ments will be required. Furthermore, the nonlinear nature of the la.ge-signal load (the output  means that the gain of the collector output may vary  ably with signal level. Intolerable distortion can be created as a result. A better way to drive the output transistors is from two low-impedance signal sources, as shown in Figure 16-18(b). Here, the output from an inverting amplifier is buffered by an emitter-follower stage, as is the original signal