To obtain a greater reduction in the ripple bf a capacitor-filtered waveform, a lowpass RC filter section can be connected across the capacitor,.The capacitor-resistor-capacitor combination is often called an RC 1r (PI) filter. The figure shows that the low-pass RC section further attenuates the 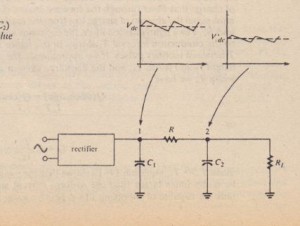 Components represented by the ripple and passes the de value, although there is some reduction in de level.’ An approximate analysis of the filter shown in Figure 17-17 can be performed by assuming that the impedance looking back into node 1 is small compared to the impedance of the rest of the filter network connected across node 1. That assumption, which is valid for large C, and small diode on-resistance, allows us to treat node 1 as a voltage source that drives the rest of the filter. We can then’ apply the superposition principle to determine the de and ac voltage components at node 2 due to the de and ac components at node 1. Figure 17-18 shows the de and ac equivalent circuits of the filter with node 1 replaced by de and ac voltage sources.

]It is apparent from Figure 17-18(a) that the de load voltage is, by voltagedivider action, Equation 17-20 shows that the use of an Refilter causes a reduction in the de voltage available at t.he load. To minimize this effect, R is usually made much smaller than RL 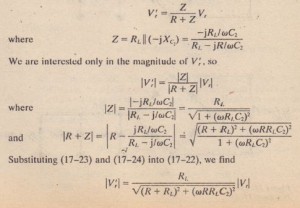 1. Find the average value and the percent ripple in the load voltage.
2. Repeat when an RC filter is inserted between the capacitor and the load 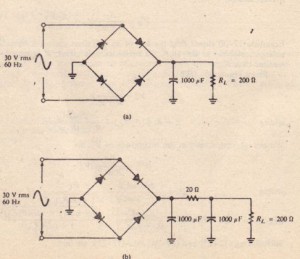 2. We will assume that VJe and V, have the same values calculated in (1). In reality, the presence of the new RC filter section affects the values of Vt/cand V, somewhat. In practical circuits, the effect is small and the computational error resulting from the assumption can be neglected. From equation 17-20,.

We see that the RC filter section has reduced the percent ripple from 1.2% to 0.087%, i.e., by a factor of more than 13. The penalty paid f’lf ihi- improvement is a 9.2% decrease in the de voltage and a reduction in the ability of the supply to regulate the output (hold a constant voltage, independent )1 load), as we shall discuss presently. If approximation 17-’27 is used to calculate the ripple we find

The series resistance in the RC filter causes a voltage drop that reduces load voltage, as we have seen. Furthermore, the voltage drop increases as load current increases, so the output voltage varies with load. This variation is undesirable in a power supply, which ideally should maintain a constant output voltage, independent of load current. (Series resistance always degrades the voltage regulation of a supply. We wiII discuss percent voltage regulation in detail in a subsequent discussion.) By connecting a low-resistance inductor in place of the series resistor, as shown in Figure 17-20, we can reduce the de voltage variation with load and at the same time attenuate ripple by virtue of the inductive reactance presented to the ac components. The filter is called an LC 1T, and while it is an improvement over the RC 1T, it does require a large and usually expensive inductor. . By an analysis similar to that used for the RC filter, the following relationships can be derived: 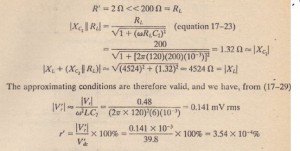