We have already discussed the initial surge current that flows through rectifier diodes when power is first applied and the uncharged filter capacitor behaves like a momentary short circuit. Figure 17-15 shows that current also surges through the diodes during the short time intervals that they are forward biased in normal operation. When the capacitor voltage is below the rectifier voltage, the total amount of charge that flows through the forward-biased diodefs) to recharge the capacitor must equal the amount of charge lost from the capacitor during the time it discharged into RI.. For a lightly loaded filter, the capacitor voltage does not decay significantly, so the conduction interval TI shown in the figure is small compared to the period T between rectifier pulses. If we approximate the current pulse as a rectangle with height Ii; and width TI• and the discharge current as a rectangle with height h. and
width T, we have Since T» Ti, equation 17-19 shows that the peak current through the diode may be many times larger than the average current supplied to the load. The diodes must be capable of supplying this repetitive surge current. 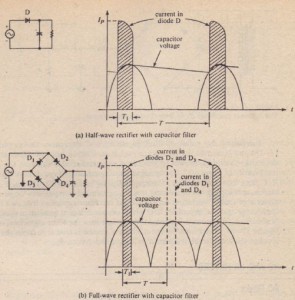 Increasing the value of filter capacitance C decreases the ripple (equation 17-18) and increases the de voltage (equation 17-16), both of which arc generally desirable outcomes. However, Increased capacitance also shortens the conduction interval TJ in Figure 17-15, because the capacitor voltage decays less when the .RLC time constant is large. Consequently, by equation 17-19, large capacitance increases the peak diode current, and the permissible repetitive surge current imposes a practical limitation on the size of the filter capacitor that can be used.

To limit surge current, especially that which occurs at initial turn-on, a small resistance is sometimes connected between the rectifier and the filter capacitor, as shown in Figure 17-16. One disadvantage of this resistance is that it reduces the dc voltage level at the load, since it forms a voltage divider with RL