Virtually all modern electronic devices are constructed from semiconductor material. As the name implies. a semiconductor is neither an electrical insulator (like rubber or plastic) nor a good conductor of electric current (like copper or aluminum). Furthermore the mechanism by which charge flows through a semiconductor cannot be entirely explained by the process known to cause the flow of charge through other materials. In other words a semiconductor is something more than just a conductor that does not conduct very well, or an insulator that allows some charge to pass through it

The electrical characteristics of a semiconductor stem from the way its atoms interlock with each other to form the structure of the material. Recall that conductors have nearly empty valence shells and tend to produce free electrons while insulators tend to retain valence electrons. The valence shell of a semiconductor atom is such that it can just fill an incomplete sub shell by acquiring four more electrons. For example we have already noted that the p subshell of the M shell in silicon contains 2 electrons. Given four more this sub shell would be filled. A semiconductor atom seeks this state of stability and achieves it by sharing the valence electrons of four of its neighboring atoms. It in turn shares each of its own four electrons with its four neighbors and thus contributes to the filling of their subshells. Every atom duplicates this process, so every atom uses four of its own electrons and one each from four of its neighbors to fill its p sub shell. The result is a stable, tightly bound: lattice structure called a crystal.

The interlocking of semiconductor atoms through electron sharing is called covalent bonding. It is important to be able to visualize this structure and Figure 2-2 shows a two-dimensional representation of it. Of course a true crystal is a three-dimensional object-the covalent bonding occurs in all directions-but the 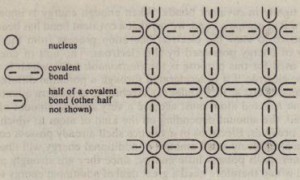 figure should help clarify the concept of covalent bonding. Remember that we show only the valence electrons of each atom

In Figure 2-2 each pair of shared electrons forms a covalent bond which is shown as two electrons enclosed by an oval. Note that only the center atom is I shown with a complete set of 4 covalent bonds but all of the other atoms would be similarly interlocked with their neighbors. As previously described the center atom uses its own four electrons and one from each of four neighbors so it effectively has 8 electrons in its M shell. The atom directly above the center one similarly has four of its own electrons and one from each of four neighbors (although only three are shown) so it too has 8.

Germanium (symbol Ge) is another element whose valence shell enables it to establish covalent bonds with its neighbors and form a crystalline structure. In Example 2-1, we saw that its N shell contains 4 electrons, 2 of which are in the p subshell. Therefore, it too can complete a subshell by the acquisition of 4 electrons. Like silicon (symbol Si), germanium atoms interlock and form a semiconductor material that is used to construct electronic devices. (However, because of temperature- related properties that we will discuss later, germanium is not now so widely used as silicon.) Note that the diagram in Figure 2-2 applies equally to germanium and silicon, since only valence shell electrons are shown. Carbon also has a valence shell that enables it to establish covalent bonds and form a crystal, but it assumes that form only after being SUbjected to extreme heating and pressure. A carbon crystal is in fact a diamond, and it is not used in the construction of semiconductor devices.