Semiconductor devices are the fundamental building blocks from which all types of useful electronic products are constructed-amplifiers high-frequency communications equipment power supplies computers control systems to name only a few. It is possible to learn how these devices-diodes transistors integrated circuits can be connected together to create such useful products with little or no knowledge of the semiconductor theory that explains how the devices themselves operate. However the person who understands that theory has a greater knowledge of the capabilities and limitations of devices and is therefore able to use them in more innovative and efficient ways than the person who does not. Furthermore, it is often the case that the success or failure of a complex electronic system can be traced to a certain peculiarity or operating characteristic of a single device and an intimate knowledge of how and why that device behaves the wait does is the key to reliable designs or to practical remedies for substandard performance.

In Sections 2-2 through 2-7.•we will study the fundamental theory underlying the flow of charged particles through semiconductor material the material from which all modern devices are constructed. We will also learn the theory of operation of the most fundamental semiconductor device: the diode. The theory presented here includes numerous equations that allow us to compute and assign quantitative values to important atomic-level properties of semiconductors. Readers who do not need or wish to study semiconductor theory in such depth may prefer to go directly to Section 2-9 “Summary and Overview.” which is a condensed version of the sections that follow. Although Section 2-9 does not contain the technical detail of Sections 2-2 through 2-7 it does provide adequate background for all subsequent discussions of device theory.

A study of modern electronic devices must begin with a study of the materials from which those devices are constructed. Knowledge of the principles of material composition at the level of the fundamental structure of matter is an important prerequisite in the field of study we call electronics ‘because the ultimate concern of that field is predicting and controlling the flow of atomic charge. Towards developing an appreciation of how atomic structure influences the electrical properties of materials, let us begin with a review of the structure of that most fundamental of all building blocks: the atom itself.

Every chemical element is composed of atoms and all of the atoms within a single element have the same structure. Each element is unique because that common structure of its atoms is unique. Each atom is itself composed of a central nucleus containing one or more positively charged particles called protons. When an atom is complete its nucleus is surrounded by negatively charged particles called electrons equal in number to the quantity of protons in the nucleus. Since the positive charge on each proton is equal in magnitude to the negative charge on each electron the complete atom is electrically neutral. Depending on the element that a particular atom represents the nucleus may also contain particles called neutrons that carry no electrical charge. An atom from the simplest of all clements hydrogen contains exactly one electron and has a nucleus composed of one proton and no neutrons. All other elements have at least one neutron.

Figure 2-1(a) is a diagram of the structure of an isolated atom of the clement silicon the material used most often in the construction of modern electronic devices. Rather than showing a cluster of individual protons and neutrons in the nucleus the figure simply shows that the nucleus contains 14 (positively charged) protons and 14 neutrons. Notice that the atom is neutral, since it contains a total
of 14 (negatively charged) electrons. These electrons are shown distributed among three distinct orbits around the nucleus. The electrons within a given orbit are said to occupy an electron shell and it is well known that each shell in an atom can contain no more than a certain maximum number of electrons. If the first four shells are numbered in sequence beginning from the innermost shell (shell number 1 being that closest to the nucleus) then the maximum number (Nt) of electrons that shell number n can contain is 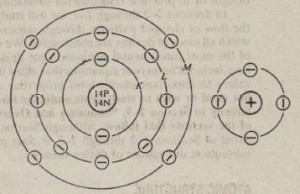 Each shell is divided into subshells, the nth shell having n subshells. The first subshell in an electron shell can contain 2 electrons. If the shell has a second subshell, it can contain 4 additional, or 6 total, electrons; and if there is a third , subshelJ, it can contain four more, or 10, electrons. The first shell of silicon has only one subshcll (n = l ) and it is filled (2 electrons); the second shell has two (II = 2) filled subshells (containing 2 and 6 electrons); and the third shell has one filled subshell containing 2 electrons. The second subshell of the third shell can contain. 6 electrons but has only 2. In practice, shells are given letter designations rather than numerical ones, so shells 1, 2, 3, 4, … , are referred to as shells K, L, M, N, … , as shown in Figure 2-1(a). Subshells are designated s, p, d, f

The nucleus of a germanium atom has 32 protons. Assuming that each shell must be filled before a succeeding shell can contain any electrons determine the number of electrons in each of its shells and in the sub shells of each shell

Solution. There are 32 electrons and they fill the shells as shown in the contents column of the following table: 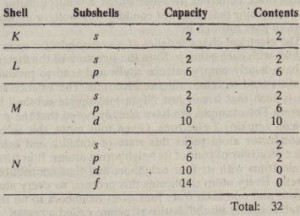 Not every electron in every atom is constrained forever to occupy a ceua in shell Of sub shell of an atomic nucleus. Although electrons tend to remain in their shells because of their force of attraction to the positively charged nucleus some of them acquire enough energy (as, for example, from heating) to break away from their “parent” atoms and wander randomly through the material. Electrons that have escaped their shells are called free electrons. Conductors have a great many free electrons, while insulators have relatively few

Since we will be concerned primarily with the behavior of electrons in the valence shell we will abbreviate all future diagrams of atoms so that only the nucleus and the valence electrons are shown. The silicon atom is shown in this abbreviated manner in Figure 2-1(b).