The lower cutoff frequency of an amplifier is affected by capacitance connected in series with the signal flow path. The most important example of series-connected capacitance is the amplifier’s input and output coupling capacitors. At low frequencies, the reluctance of these capacitors becomes very large, so a significant portion of tl e ac signal is dropped across them. As frequency approaches, the open circuit}, the coupling capacitors perform their intended role of blocking all current flow. In previous discussions, we have assumed that the signal frequency was high enough that the capacities reluctance of all coupling capacitors was negligibly small, but we will now consider how large resistances at low frequencies affect the overall voltage gain. Figure 10-7 shows the capacitor-resistor combination formed by the coupling capacitor and the input resistance at the input side of an amplifier. We omit consideration of any signal-source resistance for the moment. notice that rill and the capacity clearance of C1 form a voltage divider athe amplifier input. The amplifier input voltage, is found from the voltage-divider rule:

In many practical investigations, including computer-generated frequency-res’ Dose data. it is necessary to specify logarithmic frequency intervals within one decade or within one octave, FoJ’ example, we may want ten logarithmic ally spaced frequencies  within one decade. These frequencies are said to be at one-tenth decade intervals. Similarly. three logarithmic ally spaced frequent ies in one octave are said to be at Figure 10-7 input resistance oj the amplifier and tlte coupling capacitor [arm an RC network that reduces the amplifier’s input signup! III low frequencies .This result shows that the amplifier input voltage falls to 0.707 times the source voltage when the frequency is reduced to rad!s. Therefore, if there are no other frequency-sensitive components affecting the signal level, the overall gain from source to output is 0.707 times its mid band value, meaning that rad/s is the lower cutoff frequency. It is an exercise at the end of this chapter to show that the lower cutoff frequency is the frequency at which the capacities repentance equals the resistance If source resistance rs is present, then equation 10-13 becomes The cutoff frequency defined by equations 10-15 and 10-16 is the frequency at which the ratio is 0.707 times its midland value, namely,times (rs + rot). The ratio  / can be written in.terms of the cutoff frequency /J and the signal frequency f as follows: 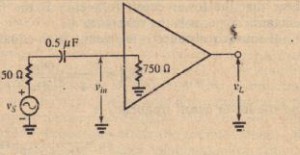 At cutoff, the gain is 3 dB less than its mid-band value: 39.08 – 3 = 36.08 Figure 10-9 shows normalized plots of the gain of network connected so that the capacitor is in series with the signal flow and.output is taken across the resistor. This is the configuration at the input of the coupled amplifier, as shown in Figure 10-7. The gain of the network Chesapeake (0 dB) at high frequencies, which corresponds to the condition = 1, when the capacities t reluctance is negligibly small. Of course, the overall gain of an amplifier have a capacitor-coupled input may be greater than 1 at frequencies above cutoff, but the shape of the frequency response is the same as that shown in Figure IO-~. The only difference is that the gain above cutoff is Am-the amplifier’s mid band gathering than. Note that the plots in Figure 10-9 extend 2 decades below and I decade above the cutoff frequency. which is labeled k Figure 10-9(0) shows that the gain is “down” approximately 6 dB at a frequency I octave below cutoff (05/1) and is down 20 dB I decade below cutoff at. Figure 10-c) shows that the phase shift is 63.40 one octave below fl and 87.10 one decade below fi. The gain is down 0.04 dB and the phase shirt is 5.70 at a frequency 1 decade above cutoff (10M, The gain plots also show the straight line asymptotic that the gain approaches at frequencies below cutoff. An asymptotic is often used to approximate the gain response, Note that it “breaks” downward at f” where its deviation from the actual response curve is the greatest (3 dB):The frequency at which an asymptotic breaks (Ji in this example) is called a break frequency. The asymptotic has a slope of 6 octave, or 20 db/decade. When using these plots, remember that they are valid for only a single resistor-capacitor (RC) combination. We will study the effects of multiple RC combinations in the signal now path in a later discussion. The plots in Figure 10-9 apply to any RC work in which the capacitor is in series with the signal path and the output is taken across the resistor. Such a network is called a high-pass filter, because, as the plots snow, the gain is constant at high frequencies (above cutoff) and “falls off,” at a constant rate, below cutoff. To find the overall gain of an RC network in which part of resistance (rs) is in the signal source, the gain determined from the plot must be multiplied by the factor Normalized freq<response plot Showing. pin vs, frequency or RC network lower cutoff  Both lain and arc plotted on scales. Figure 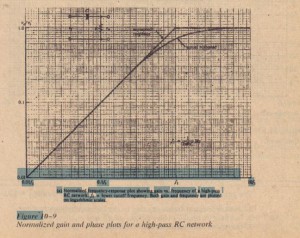