coil Once that provides an ac path between an amplifier’s signal flow path and ground is said to shunt the signal. The most common form 01 shunt capacitance is t which exists between the terminals of an electronic device due to its structural characterize-tics. Recall, lot example, that a PN junction has capacitance between its terminals because the depletion region forms a dielectric separating the two conductive regions of P and N material. Capacitance between device terminals is culled electrode capacitance. Shunt capacitance is also created by wiring. terminal connections, solder joints, and any other circuit structure where conducting regions are close to each other. This type of capacitance is called stray capacitance. SD capacitance affects the high-frequency performance of an amplifier because at high frequencies the small capacities repentance diverts the signal to ground. or to some other point besides the load. A semiconductor device has inherent frequency limitations that may impose more severe restrictions on high-frequency operation than the effect of shunt capacitance we will study now, but these device considerations will be temporarily postponed. Figure 10- I5 show shunt capacitance C between the input side of an amplifier and ground (in parallel with rill)’ Notice that now neglect·’ series coupling capacitance. because we arc considering only high-frequency operation In the mid-band frequency range, the effect of C” in Figure 10-15 can be neglected because the frequency is not high enough to make the capacities reluctance small. In other words, the mid-band frequency range is that range of frequencies that arc high enough to neglect coupling capacitance and low enough to neglect shunt capacitance. It is apparent in the figure that, in the mid-band frequency ,When the frequency is high enough to consider the effect of Ct. we must replace in (10-24) by the parallel combination of drill and very high frequencies, where, becomes very small. the parallel combination of X; and 1 becomes very small, am the net effect is the same as if the input impedance of the amplifier were made small. As we know, the consequence of that result is that the overall gain is reduced due to the voltage division between rs and the input impedance. Our goal now is to find the frequency at which that reduction in gain equals 0.707 times the mid-band value given by equation 10-24. From

Equation 10-27 shows that the upper cutoff frequency due to C” is inversely proportional to the parallel combination of rs and r.; Thus, to achieve II large bandwidth it is necessary to make as small as possible, preferably by making I’s small. Theoretically practice, it is not possible to have I’.~= 0, but a very small value of rs can increase the upper cutoff frequency significantly (not always a desirable practice, as we shall see in later discussions). An RC network in which the resistor is in series with the signal now path and the output is taken across the shunt capacitor is caned <\ Iow-puss filcer. The upper cutoff frequency /2 is determined by j; = 1/(TRACT) Hz. Comparing with equation 1’6~27 we see that the input of an amplifier having shunt capacitance C” is the same as a low-pass filter having R = rs II 1′;11 and C = Ct. Normalized gain and phase plots for the low-pass RC network are shown in Figure 10-16. Note that the gain plot is the mirror image of that of the high-pass RC network shown in Figure lO-lJ. The asymptotic shows that the gain falls off at the rate of 6 dbl octave, or 20  decade, at frequencies above h. The shift approaches -900 at frequencies above 2. Note that negative phase means that the output voltage lags the input 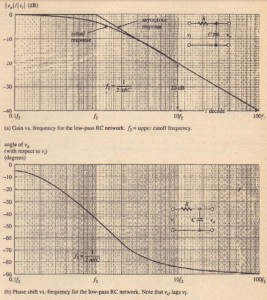 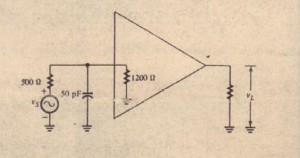