In.earlier chapters we discussed several zener-diode applications, perhaps the most important of which is the zener voltage reference used in regulator circuits. We wish now to examine the characteristics and limitations of these devices in more detail, so we can interpret and apply specifications for some of their important parameters.

Figure 18-1 shows a typical 1- V characteristic for a zener diode. The forward biased characteristic is identical to that of a forward-biased silicon diode and obeys the same diode equation that we developed in Chapter 2 (equation 2-13). The zener diode is normally operated in its reverse-biased breakdown region, where the voltage across the device remains substantially ‘Constant as the reverse current varies over a large range. Like a fixed voltage source, this ability to maintain a constant voltage across its terminals, independent of current, is what makes the device useful as a voltage reference. The fixed breakdown voltage is called the crated in the ‘figure 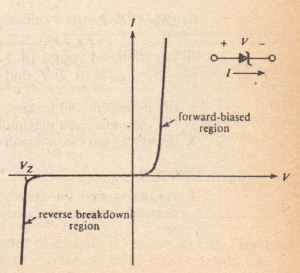 To demonstrate how a zener diode can serve as a constant voltage reference, Figure lR-2 shows a simple but widely used configuration that maintains a constant voltage across a load resistor. The circuit is an elementary ooltag» regulator (see Section 17-7) th:lt holds the load voltage near V;: volts as R” and/or VII undergo changes. So the voltage across the parallel combination of the zener and Rio remain at Vz volts, the reverse current lz through the diode must at all times be large enough to keep the device in its breakdown region, as shown in Figure 18-1. The value selected for Rs is critical in that respect. As we shall presently demonstrate, Rs must be small enough to permit adequate zener current, yet large enough to prevent the zener current and power dissipation from exceeding permissible limits. It is apparent in Figure 18-2 that

The reverse current in a certain 10-V, 2-W zener diode must be at least 5 mA to ensure that the diode remains in breakdown. The diode is to be used ill the regulator circuit shown in Figure 18-3, where Vin can vary from 15 V to 20 V. Note that the load can be switched out of the regulator circuit in this application. Find a value for Rs. What power dissipation rating should Rs have? 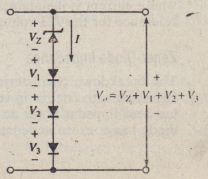 We see that compensation has improved the stability by a factor gr.eater than 10.

Temperature-compensated zener diodes are available from manufacturers in single-package units called reference diodes. These units contain specially fabricated junctions that closely track and oppose variations in Vz with temperature. Although it is possible to obtain an extremely stable reference this way, it may be necessary to maintain the zener current at a manufacturer’s specified value in order to realize the specified stability. Figure 17-43 shows a temperature-stabilized zener diode whose current is maintained by a constant-current source to ensure its stability as reference for the 723 voltage regulator

Zz is the reciprocal of the slope of the breakdown characteristic on an l r: Vz plot. The slope is not constant, so the value of Zz’ depends on the point along the characteristic where the measurement is made. The impedance decreases as lz increases; that is, the breakdown characteristic becomes steeper at points farther down the line, corresponding to greater reverse currents. For this reason, the diode should be operated with as much reverse current as possible, consistent with rating limitations. Manufacturers’ specifications for zener impedances are usually given for a specified 6./z that covers a range from a small Iz near the onset of breakdown to some percentage of the maximum rated /z. The values may range from a few ohms to several hundred ohms. There is also a variation in the impedance of zener diodes among those having different values of Vz. Diodes with breakdown voltages near 7 V have the smallest impedances.

A zener diode has impedance 40 !l in the range from lz = 1 mA to Lz = 10 mA. The voltage at lz = 1 mA is 9.1 V. Assuming that the impedance is constant over the given range, what minimum and maximum zener voltages can be expected if the diode is used in an application where the zener current changes from 2 mA to 8mA?