THE DIODE AS A CIRCUIT ELEMENT Electronics Help

In Chapter 2 we studied the construction and properties of a PN junction and mentioned that a semi conducror example of an electronic device that contains such a junction. A discrete diode is a single PN junction that has been fitted with an appropriate case (enclosure) and to which exteru.o / accessible leads have been attached. The leads allow us to make electrical connections to the anode (P) and cathode (N) sections of the diode. Semiconductor diodes are also formed inside integrated circuits as part(s) of larger, more complex networks and mayor may not have leads that arc accessible outside the package. (Integrated circuits have a large number of semiconductor components embedded and interconnected in a single crystal. We will study these devices in detail in Chapter 6.)

In this chapter, we will investigate current and voltage relationships in circuits that contain diodes. We will learn how to analyze a circuit containing a diode by replacing the diode with a simpler equiualent circuit element (such as a resistance). We will see that our choice of the circuit clement(s) used to replace the diode depends on the voltage and current levels in the circuit we are analyzing and on the accuracy that we desire from our analysis. This approach will serve as our introduction to this standard and widely used method of electronic circuit analysis: Replace actual devices by simpler equivalent circuits in order to obtain solutions that are sufficiently accurate for the application in which they are used. Understand that this is an analysis method; that is, we “replace” the diode by its equivalent circuit on paper only, in order to simplify calculations.

We will study the diode and its behavior as a circuit element in considerable detail. A thorough analysis of this, the most fundamental building block in semiconductor electronics, is motivated by the following important facts:

1. The diode is an extremely useful device in its own right. It finds wide application in practical electronic circuits. ”
2. Many electronic devices that we will study later, such as transistors, contain PN junctions that behave like diodes. A solid understanding of diodes will help us understand and analyze these more complex devices.
3. A number of standard techniques used in the analysis of electronic circuits of all kinds will be introduced in the context of diode circuit analysis. Important concepts such as linearity, small- and large-signal operation, quiescent points, bias, load lines, and equialent circuits are best learned by applying them to the analysis of ate relatively Circuit In a later chapter we will apply our knowledge of diode circuit analysis to the study of several practical circuits in which these versatile devices are used.

THE DIODE AS A NONLINEAR DEVICE

Linearity is an exceptionally important concept in electronics. For our purposes now, we can best understand the practical implications of this rather broad concept by restricting ourselves to the following definition of a linear electronic device: A device is linear If the graph relating (he voltage across it to the current through it is a straight line

If we have experimental data that shows measured values of voltage and the corresponding values of current, then it is a simple matter to plof these and determine whether the linearity criterion is satisfied. Often we have an equation that relates the voltage across a device to the current through it (or that relates the current to the voltage). If the equation is in one o.f the general forms

In these voltage-current equations, we of course assume that any other circuit characteristics such as frequency are held constant. In other words, only the magnitudes of voltage and current are regarded as variables. In each case, all else being equal, increasing or decreasing the voltage causes a proportional increase or decrease in the current. Figure 3-1 is a plot of the voltage V across a 200-0 resistor versus the current I through it. The linearity property of the resistor is clearly evident, and follows from the Ohm’s law relation V = 2001. Note that the slope of the line equals the resistance, r = t:.VIM = 200, and that the linear relation applies to negative voltages and currents as well as positive, Reversing the directions (polarities) of the voltage across and current through a linear device does not alter its linearity property. Note also that the slope of the line is everywhere the same: No matter where along the line the computation t:.VIM is performed, the result equals 200 O 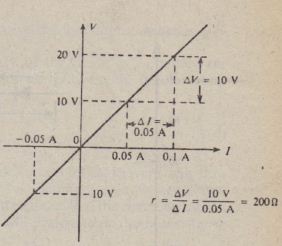 When displaying the voltage-current relationship of an electronic device on a graph, it is conventional to plot current along the vertical axis and volt-age along the horizontal axis-s-the reverse of that shown in Figure 3-1. Of course, the graph of a linear device is ” a straight line; rever a) of axes i equivalent to expressing the V-I in the form of equation 3-2, with slope having Ill<… units of conducanc G = MltlV:; IIR (siemens) instead of resistance 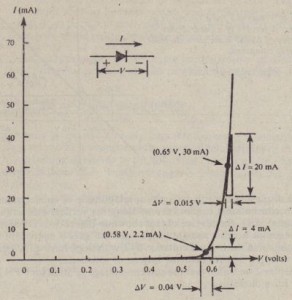 The region on the 1- V curve where the transition from high resistance to low resistance takes place is called the knee of the curve. In Figure 3-2, the knee is in the vicinity of I “‘”1 mA to I “‘”5 mA. When the diode current is significantly greater or less than that in the vicinity of the knee, we will say that it is biased above or below the knee. respectively.

Posted on November 18, 2015 in THE DIODE AS A CIRCUIT ELEMENT