The method called successive approximation is the most popular technique used to const ruct AID converters, and. with the exception of flash converters, successive approximation converters are the fastest of those we have discussed. Figure 19-18( a) shows a block diagram pf a 4-bit version. The method is best explained by way of an example. For simplifying purposes, let us assume that the output of the DIA converter ranges from 0 V through 15 V as its binary input ranges from 0000 through 1111, with 0000 producing 0 V, 0001 producing 1 V, and so i~th. Suppose . the “unknown” analog input is 13 V. On the first clock pulse, the output register  is loaded with 1000, which is converted by the DAC to 8 V. The voltage comparator determines that 8 V is less than the analog input (13 V), so on the next clock pulse, the control circuitry causes the output register to be loaded with 1100. The output of the DAC is now 12·V, which the comparator again determines is less than the analog input. Consequently, the register is loaded with 1110 on the next clock pulse. 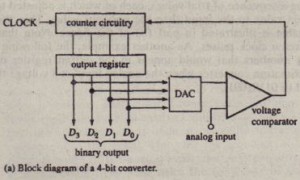 The output of the DAC is 14 V, w~lich the comparator now determines is larger than the 13-V analog input. Therefore, the last 1 that was loaded into the register is replaced with a 0, and a 1 is loaded into the LSB. This time, the output of the DAC is 13 V, which equals the analog input, so the conversion is complete. The output register contains 1101. We see that the method of successive approximation amounts to testing a sequence of trial values. each of which is adjusted to produce a number closer in value to the input than the previous value. This “homing-in” on the correct value is illustrated in part (b) of tYte figure. Note that an If-bit conversion requires If clock pulses. As another example, the following is the sequcnce of binary numbers that would appear in the output register of an 8-bit successive-approximation converter when the analog input is a voltage that is ultimately converted to 01101001:

The resolution of an AID converter is the smallest change that can be distinguished in the analog input. As in DACs, resolution depends directly on the number of bits, so it is often quoted as simply the total number of output bits. The actual value depends on the full-scale range (FSR) of the analog input:

Some AID converters have X-4-2-l BCD outputs rather than straight binary. This is especially true of dual-slope types designed for use in digital instruments. The BCD outputs facilitate driving numerical displays. The resolution of a BCD converter is quoted as the number of (decimal) digits available atthe output, where each digit is represented by 4 bits. In this context, the term ~ digit is used to refer
to a single binary output. For example, a lj-digit output is represented by 5 bits. The ~ digit is used as the most significant bit, and its presence doubles the number of decimal values that can be represented by the 4 BCD bits. Some BCD converters employ multiplexers to expand the number of output digits. An example is Texas Instruments’ TLCI35C 4~-digit AID converter. Expressed as a voltage, the resolution of a BCD AID converter is FSRIlOtl
, where d is the number of output digits.

The time required to convert a single analog input to a digital output is called the conversion lime of an AID converter. Conversion time may be quoted as including any other delays, such as access time, associated with acquiring and converting an analog input. In that case, the total number of conversions that can be performed each second is the reciprocal of the conversion time. The reason this specification is important is ·that it imposes a limit on the rate at which the analog input can be allowed to change. In effect, the AID converter samples the changing analog input when it performs a sequence of conversions. The Shannon sampling theorem states that sampled data can be used to faithfully reproduce a time-varying signal provided that the sampling rate is at least twice the frequency or the highest-frequency’ component in the signal. Thus, for the sequence of digital outputs to be il valid representation of the analog input, the AID converter. must perform conversional a rate equal to at leasttwice the frequency of the highest component of the
input.

What maximum conversion time can an ND converter have if it is to be used to convert audio input signals? (The audio frequency range is considered to be 20 Hz to 20 kHz.)

Since the highest frequency in the input may be 20 kHz, conversions should be performed at a rate of at least 40 X 103 conversions/so The maximum . allowable conversion time is there-fore equal to

One LSB for an AID converter is defined in the same way it is for a D/A converter:

where FSR is the full-scale range of the <!’1a\og input. Other AID converter specifications may be quoted in terms of all LSB or as a percentage of FSR.

A wide variety of A/D converters of all the types we have discussed are available in integrated circuits, Most have additional features, such as latched three-state outputs (0, 1, and open circuit), that make them compatible with microprocessor systems. Some have differential inputs, wherein the voltage converted to a digital output is the difference between two analog inputs. Differential inputs are valuable in reducing the effects of noise, because any noise signal common to both inputs is “differenced out.” Recall that this property is called common-mode rejection. Differential inputs also allow the user to add or subtract a fixed voltage to the analog input, thereby offsetting the values converted. Conventional (single-ended) inputs can he accommodated simply by grounding one of the differential inputs. The advances in MaS technology that have made high-density memory circuits possible have also made it possible to incorporate many special functions into a single-integrated circuit containing an ADC. Examples include sample-and-hold circuitry and analog multiplexers. With these functions, and versatile control circuitry. complete microprocessor-compatible data-acquisition systems have become available in a single-integrated circuit. The microprocessor can be programmed to control the multiplexer so that analog data from many different sources (up 10 19 in some versions) can be sampled in a desired sequence. The analog data from an inst rumcntation system, for example, is sampled, converted, and transmitted directly to the microprocessor for storing in memory or further processing .