In Chapter 11. we reviewed basic transformer theory and discussed transformer coupled amplifiers. Transformers are also used to couple power amplifiers to their loads and, in those applications. are called output transformers. As in other coupling applications. the advantages of a transformer are that it provides an opportunity to achieve impedance matching for maximum power transfer and that it blocks the flow of de current in a load.

Figure 16-9 shows a transformer used to couple the output of ‘a transistor to load RL• Also shown are the dc and ac load lines for the amplifier. Here we assume that the de resistance of the primary winding is negligibly small. so the de load line is vertical (slope = -lIRdc = -00). Recall that the ac resistance rc reflected to the primary side is

where NI’ and N, are the numbers of turns on the primary and secondary windings, respectively. As shown in the figure. the slope of the ac load line is -11r Since we are assuming that there is negligible resistance in the primary winding there is no de voltage drop across the winding, and the quiescent collector voltage 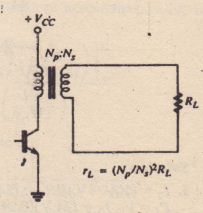 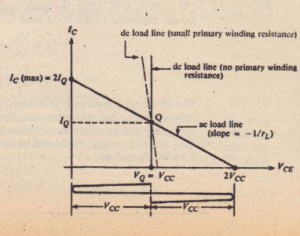 is therefore VIT. volts, as shown in Figure 16-9. Conventional base-bias circuitry (not shown in the figure) is used to set the quiescent collector current lu. The Q-point’ is the point on the dc load line at which the collector current equals IQ

Since Va cannot be negative, the maximum permissible decrease in VCE below its quiescent value is Va = Va: volts. Thus, the maximum possible peak value of VeE is VIT. volts. To achieve maximum peak-to-peak output variation the intercept of the ac toad line on the VeE-axis should therefore be 2Vce volts, as shown in Figure 16-~. The quiescent current IQ is selected so that the ac load line, a line having slope -1Irl., intersects the Va-axis at 2 Vee volts. .

Ute ac load line intersects the Ie-axis in Figure 16-9 at Ic(max). Note that there is no theoretical limit to the value that Ie may have, since there is no limiting resistance in the collector circuit. However, in practice, Ie must not exceed the maximum permissible collector current for the transistor and it must not be so great that the magnetic flux of the transformer saturates. When the transformer saturates, it can no longer induce current in the secondary winding and signal distortion results. When 10 is set for maximum signal swing (so that VeE(lilax) = 2Vcc>,lo is one-half Ic(max); that is,lc(max) ,. 2lQ, as shown in Figure 16-9. Thus, • the maximum values of the peak primary voltage and peak primary current are Vcc and IQ• respectively. Since the ac output can vary through this range, below and above the quiescent point, the amplifier is of the class-A type.

The ac power delivered to load resistance RI. in Figure 16-9 is

whcre V, = Vn is the peak value of the secondary, or load, voltage. The average power from the de supply is

Therefore, the efficiency is

Under maximum signal conditions, the peak primary voltage is Vce volts, so the peak load voltage is

Also, since the slope of the ac load line is -lIrl., we have

In practice, a full output voltage swing of 2Vcc volts cannot be achieved in a power transistor. The device is prevented from cutting off entirely by virtue of a relatively large leakage current, and it cannot be driven all the way into saturation (Ie = Ic(max» without creating excessive distortion. These points are illustrated in the next example

1. Construct the (ideal) de and ac load lines necessary to achieve maximum output voltage swing. What quiescent values of collector and base current arc necessary to realize the ac load line?
2. What is the smallest value of lc{max) for which the transistor should be rated?
3. What is the maximum peak-to-peak collector voltage, and what peak-to-peak base current is required to achieve it? Assume that the base current cannot go negative and that, to minimize distortion, the collector should not be driven below 2.5 V in the saturation region.
4. Find the average power delivered to the load under the maximum signal conditions of (3). 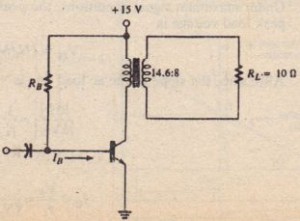 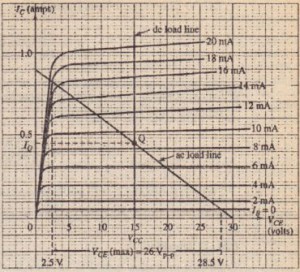 5. Find the power dissipated in the transistor under no-signal conditions (standby).
6. Find the efficiency.

(Why is this value less than the theoretical maximum of 0.5?)