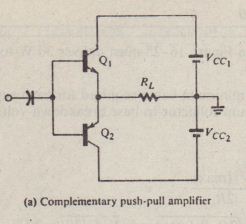 Figure 16-25(b) shows that current flows in a counterclockwise path through the load when the input signal on the base of NPN transistor QI is positive. The positive input simultaneously appears on the base of PNP transistor Q2 and keeps it cut off. When the input is negative. QI is cut off and Q2 conducts current through the load in the opposite direction, as shown in 16-25(c).

1. What is the minimum value required for each supply voltage?
2. What minimum collector-to-base breakdown-voltage rating should each transistor have’!

The push-pull amplifier in Figure 16-25 has iVcni = iVcni = 30 V and RI. = SPICE 15 O. The input coupling capacitor is 100 p,F. Assuming the transistors have their . default parameters, use SPICE to obtain a plot of one full cycle of output then the input is 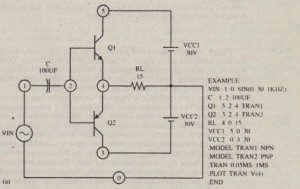 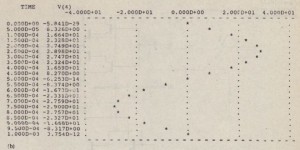 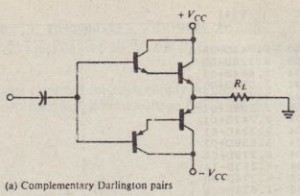 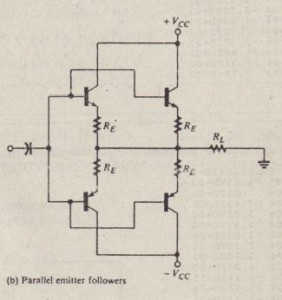 Figure 16-27 shows two variations on the basic complementary, push-pull amplitier. 1;’1 (a); thetransistors arc replaced by emitter-follower Darlington pairs. Since power transistors tend to have low betas, particularly at high current levels, the Darlington pair improves the drive capabilities and the current gain of the amplifier as discussed in Chapter l l , These devices are available in matched complementary sets with current ratings up to 20 A. Figure 16-27(b) shows how emitter-follower ‘transistors can be operated in parallel to increase the overall current-handling capability of the amplifier. In this variation, the parallel transistors must be matched closely to prevent “current hogging,” wherein one device carries most of the load, thus subverting the intention of load sharing. Small emitter resistors R; shown in the figure introduce negative feedback and help prevent current hogging, at the expense of efficiency. Amplifiers capable of dissipating several hundred watts have been constructed using this arrangement. 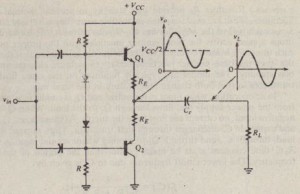 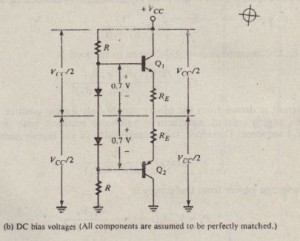 The complementary amplifier in Figure 16-28 can be operated with a single power supply because the output v” is biased at half the supply voltage and is capacitor-coupled to the load. The resistor-diode network connected across the transistor bases is used to bias each transistor near the threshold of conduction. Crossover distortion can be reduced or eliminated by inserting another resistor
(not shown in the figure) in series with the diodes to bias the transistors further into AB operation. Assuming that all components are perfectly matched, the supply voltage will divide equally across each half of the amplifier, as shown in Figure 16-2X(b). (In practice, one of the resistors R can be made adjustable for balance

Resistors R; provide bias stability to prevent thermal runaway (see
Section 6-1) but are made ( s small as possible since they adversely affect efficiency. Since each half of the amp ifier has Vccl2 volts across it, the forward-biased diode drops appear across the base-emitter junctions with the proper polarity to bias each transistor toward conduction. The diodes arc selected so that their characteristics track the base-emitter junctions under temperature changes and thus ensure bias stability. The diodes are typically mounted nil the same heat sinks as the transistors so that both change temperature in the same way

In ac operation, when input VI is positive and 0, IS conductk.g, current is drawn from the power supply and flows through 0, to the load. When 0, is cut off by a negative input, no current can How fro the supply. At those times, Qz is conducting and capacitor C,. discharges through that transistor. Thus, current flows from the load, through C, and through Q2 to ground whenever the input is negative. The RI.C •. time constant must be much greater than the period of the. lowest signal frequency. The lower cutoff frequency due to Cc is given by

thereiore, till; average ac power delivered ° the load is 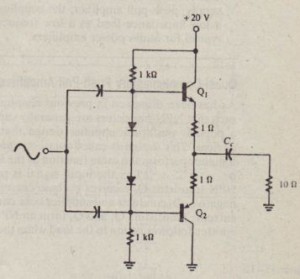 This result demonstrates a principal disadvantage of the complementary single supply push-pull amplifier: the coupling ca oacitor must be quite large to drive a low-impedance load at a low frequency These operating requirements are typical for audio power amplifiers

As has been discussed in previous chapters, modern semiconductor technology is’ such that NPN transistors are generally superior to PNP types. Figure 16-31 shows a popular push-pull amplifier design that uses NPN transistors for both output
devices. This design is called quasi-complementary because transistors QJ and Q~ together perform the same function as the PNP transistor in a romp ementary pushp”the input signal is positive, PNP transistor 0.1 is cut off, so NPN transistor 04 receives no base current and is also CUI 011. VVn”,,, the input is negative, OJ conducts and supplies base current to 04, which can then conduct load current. Transistors O. and Oz form an NPN Darlington pair; so 01 and O2 provide emitter-follower action to the load when the input is positive. and 0.\ and 04 perform 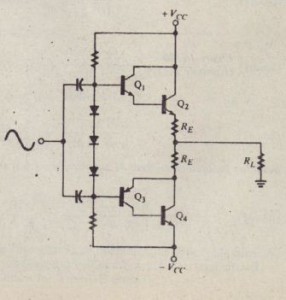 that function when the input is negative. The entire configuration thus performs, push-pull operation in the same manner as the comple=-entary push-pull amplifier. The current gain of the Q.lQ4 combination is

Low- to medium-power audio amplifiers (in the 1- to 20-W range) are available in integrated circuit form. Many have differential inputs and quasi-complementary outputs. Figure 16-32 shows an example, the LM3HO2.5-W audio amplifier manufac 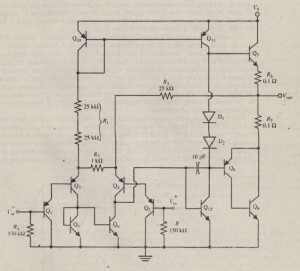 One feature of the LM380 is that internal resistor networks (R1 a d R2) are used to set the output bias level automatically at one-half the supply voltage, Vs. The output is normally capacitor-coupled to the load. The voltage gain of the amplifier is fixed at 50 (34 dB). Manufacturer’s specifications state that the bandwidth is 100 kHz and that the total harmonic distortion is typically 0.2%, The supply voltage can be set from 10 to 22 V.