As noted earlier, many commercially available amplifiers have internal compensation circuitry to make the frequency response roll off at 6 dB/octave (20 dB/decade) over the entire frequency range from j;. to f, (Figure 13-15). Some amplilkr:-not have such circuitry and must he compensated by connecting external roll-off networks. These networks. typically RC circuits, are selected by the user to ensure that the frequency response is 6 dB/octave at the closed-loop gain at which the amplifier is to be operated. Manufacturers’ specifications usually include equations for determining the values of tho components of external roll-off networks, based on the closed-loop gain desired.

A typical frequency response of an uncompensated amplifier. Compensation is particularly critical when the amplifier is to be operated.a small closed-loop gain, since the bandwidth is then v~ty h\\l~eiHitl thc,linllililld’s roll-off rate may be 12 or IX dB/octave. ratefi, thtl\ jedp,II,thze stuliility. Figure 13-IX(a) also shows an example of a tcsl)tll\li~ lhtll hil!; bedi cbtnpcnsnteu to roll off at 6 dB/octave when a particular value of closed-lonb gain, Arl.l is desired. Noh: that the roll-off rate would be 12 dR/octave If the \illcolHpehsat 1IiHt!rwere used at that value: of closed-loop gain. I~ is dea\’ ,that cortiperisnlion reduces the handwidth of the amplifier, However, It is generally irue \I1at user compensation results in a wider bandwidth than ‘Call be achieved with an internally compensated amplifier that rolls off at 6 dB/octave over its entire range, Figure J3..::]8(b) shows a typical RC network used for external compensation: Note that this network is usua\1y connected to an internal stage of the ~ffi~liner at an external terminal that may be identified as “roll-off;or “frequency compensation.”

The external compeusatlcn snown In Figure t3-18(b) is ca\1ed lag phase compensation. Figure 13-18(c) shows an example of lead compensation, used to offset the effects of Input and stray capacitance. The feedback capaeltor t{ is selected so that the break frequency due to the combination of  capacitance equals the br eak frequency due to n, aiid C”

We have discussed the fact that Internal compcnsatlon circuitry used to ensure amplifier stability also affects the frequency response and places it limit on the maximum operating frequency. The capacitorts) it1 this compensation circuitry limit amplifier performance in still another way. When the amplifier is driven by a step or pulse-type signal, the capacitance must charge und discharge rapidly in order for the output to “keep up with,” or track. the input.

Since the voltage across a capacitor cannot be changed instantaneously, there is art inherent limit on the rate at which the output voltage can change. The maximum possible rate at which an
amplifier’s output voltage can change, in volts per second, is’ called its slew rate. It is nut possible for any waveform, input or output, to change from one level to another in zero time. An instantaneous change corresponds to an infinite rate of dU/1/Ke. which is not realizable in any physical system. Therefore, in our investigation of performance limitations imposed by an amplifier’s slew rate. we need concern ourselves only with inputs that undergo a total change in voltage, AV, over some nonzero time interval, At, For simplicity, we will assume that the change is linear with respect to time; that is, it is a I’tlllI/J-type waveform, as illustrated in Figure I~-Il),The rate of change of this kind of waveform is the change in voltage divided by the length of time that it takes for the change to occur:

Since the value specified for the slew rate of an amplifier is the maximum rate at which its output can change, we cannot drive the amplifier with any kind of input

In specifications. the slew rate is often quoted in the units volts per microsecond. Of course, I V/J.l.s is the same as I()I’ VIs: (I V)I(IO to s) = JOh VIs.

The operational amplifier in Figure 13-20 has a slew rate specification of 0.5 VI us. Jf the input IS’the ramp waveform shown, what is the maximum ‘closed-loop gain that the amplifier can have without exceeding its slew rate?

Slew rate is a performance specification used primarily’ in applications where the waveforms an: large-signal pulses or steps that cause the output to swing through a substantial part of its total range (± V(‘c volts). However, the slew rate imposes a limitation on output rate of change regardless of the nature of the signal waveform. In particular, if the signal is sinusoidal, or a complex waveform containing many different frequencies, we must be certain that no large-amplitude, high-frequency component will require the output to exceed the slew rate. High-frequency signals change (continuously) at rapid rates, and if their amplitudes arc so large that the slew rule specification is exceeded, distortion will result. It is especially important to realize that a frequency component may be within the bandwidth of the amplifier, as determined in Section B-3, but may have such a large amplitude that it must be excluded because of slew rate limitations. The converse is also true:

A highfrequency signal that does not exceed the slew rate may have to be excluded because it is outside the amplifier bandwidth. In other words, the maximum frequency at which an amplifier can be operated depends on both the bandwidth and the slew rate, the latter being a function of amplitude as well as frequency. In a later discussion, we will summarize the criteria for determining the operating frequency range of an amplifier based on both slew rate and bandwidth limitations.  When the output of an amplifier is the sine-wave voltage U,,(/) = K sin wi, it can be shown using calculus (differentiating with respect to I) that the signal has a maximum rate of change given

where K is the peak :I III piitudc of the sine wave, in volts, and w is the angular frequency. in radians/second. (We use K to represent amplitude. rather than the conventional A, to avoid confusion with the symbol for gain.) Equation \3-42 clearly shows that the rate of change is proportional to both the amplitude and the frequency of the signal. If S is the specified slew rate of an amplifier, then we 111m! have

We emphasize again that f~(max) is the frequency limit imposed by the slew rate alone, i.e  disregarding bandwidth limitations. Also. equation 13-44 applies to sinusoidal signals only. When dealing with complex waveforms containing many different frequency components. the slew rate should be at least as great as that necessary to satisfy equation 13-44 for the highest frequency component. Depending on phase relations, maximum rates of change may actually be additive.

I. Determine whether the output will be distorted due to slew-rate limitations on any input.
2. If so, find a remedy (other than changing the input signals).

We must check each frequency to verify that w :5 w.I(max) = S/ K rad/s. Note ‘ that K is the peak amplitude tit the output of the amplifier, so each input amplitude must be multiplied by the closed-loop gain before the check is performed. Assuming that the closed-loop gain is ideal, we have v./Vjll = -RlRI = -(330 kD.)/(lO kD.) = -33. Thus, the upper limit on the w of each signal component will be SI (33 Ki), where K, is the peak amplitude of the input.

We see that V2 and VJ would both cause the slew rate specification of the amplifier to be exceeded. Consequently, the output will be distorted.
2. Since we cannot change the input signal amplitudes or frequencies. there arc only two remedies: (a) find an amplifier with a greater slew rate, or (b) reduce the closed-loop gain or the present amplifier. We will investigate both remedies. 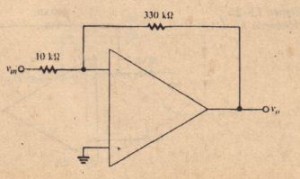 To ensure that an operational-amplifier circuit will not distort a signal component having frequency [. we require that both of the following conditions be satisfied:

The operational amplifier in Figure 13-22 has a unity-gain frequency of I MHz and a slew rate of 1 YIus. Find the maximum frequency of a 0.1-Y-peak sine-wave input that can be amplified without distortion.

Another practical limit that is not considered in the foregoing is the maximum permissible output voltage of the amplifier. If we used Rf = 620 kO in the present example, then the closed-loop gain would be RfIR, = 620 kO/lO kO = 62, and the peak output voltage would be 62 (0.5 Y pk) = 31 Y pk, which is too large for many commercially available ampliliers.

We have seen that an amplifier’s slew rate affects its ability to track, or follow, a rapidly changing input pulse. When the output voltage must change through volts, the minimum possible time in which that change can occur.

An amplifier’s bandwidth also affects the time required for its output to change in response to a pulse input. Recall from Chapter 10 that the rise lime I, of a singlepole system is

Wl! defined rise time to be the time required for a voltage to change from 10% of its final value to 1)0% of its final value. Therefore, if we wish the output to follow a pulse through its en/ire variation in At seconds, the bandwidth should be larger than that required by equation 13-49. In other words, equation 13-49 requires a bandwidth of BW = 0.35It, to achieve a rise time of t, hut BW = 0.35/6t would not be sufficient to permit a [ul! voltage variation in At seconds.

We conclude from the foregoing remarks that both slew rate and bandwidth affect the minimum time tJ.t that an amplifier output can change through AV volts. If we now let At be the total time through which a given input changes value, then the amplifier must satisfy both of the following conditions in order to track that input without distortion:

The operational amplifier shown in Figure 13-24 has a slew rate of 4 VI J.LS and a unity-gain frequency of 2 MHz. Determine whether the amplifier will distort the input signal shown. 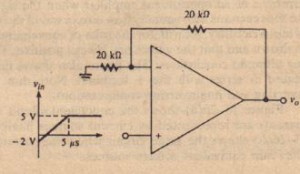