Diodes and capacitors can be connected in various configurations to produce filtered, rectified voltages that are integer multiples of the peak value of an input sine wave. The principle of operation of these circuits is similar to that of the clamping circuits discussed in Chapter 15. By using a transformer to change the amplitude of an ac voltage before it is applied to a voltage multiplier, a wide range of dc levels can be produced using this technique. One advantage of a voltage multip lier is that high voltages can be obtained without using a high-voltage transformer.

A half-wave voltage doubler. When ViII first goes positive. diode DJ is forward biased and diode D, is reverse biased. Because the forward resistance of DJ is quite small, CJ charges rapidly to Vp (neglecting the diode drop), as shown in (b). During the ensuing negative half-cycle of Vin, DJ is reverse biased and D, is forward biased, as shown in (c). Consequently, C2 charges rapidly, with polarity shown. Neglecting the drop across D2, we can write Kirchhoff’s voltage law around the loop at the instant ViII reaches its negative peak, and obtain. During the next positive half-cycle of ViII, D2 is again reverse biased and the voltage across the output terminals remains at Ve2 == 2 VI’ volts. Note carefully the polarity of the output. If a load resistor is connected across C~,then C~ will discharge into the load during positive half-cycles of Vi,,, and will recharge to 2 \’ p Vults during negative half-cycles, creating the usual ripple waveform. The PIV raliJlg of each diode must be at least 2 Vp volts 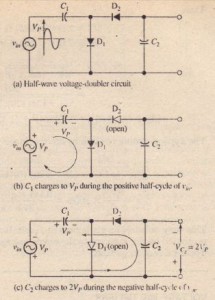 Figure 17-22(a) shows a full-wave voltage doubler. This circuit is the same as the full-wave bridge rectifier shown in Figure 17-6, with two of the diodes replaced by capacitors. When ViII is .positive, DI conducts and C, charges to VI’ volts. as shown in (b). When ViII is negative, D, conducts and C2 charges to Vp volts, with the polarity shown in (c). It is clear that the output voltage is then VC, +Vc1 = 2V/, volts. Since one or the other of the capacitors is charging during every half-cycle, the output is the same as that of a capacitor-Iiltered, full-wave rectifier. Note, however, that the effective filter capacitance is that of C, and C2 in series, which is less than either C, or C2• The PlY rating of each diode must be at least 2 VI’ volts.

By connecting additional diode-capacitor sections across the half-wave voltage doubler, output voltages equal to three and four times the input peak voltage can be obtained. The circuit is shown in Figure 17-23. When v'” first goes positive, C, charges to VI’ through forward-biased diode 01, On the ensuing negative half-cycle,C! charges through D! ami, as demonstrated earlier. the voltage a~ross C! equals 2 VI” During the next positive half-cycle, 0.1 is forward biased and C3 charges 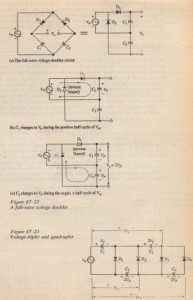 the same voltage attained by C2: 2Vp volts. On the next neg-ative half-cycle, D2 and D4 are forward biased and C4 charges to 2Vp volts. As. shown in the figure, the • voltage across the combination of CI and C3 is 3Vp volts, and that across C2 and C4 is 4 VI’ volts. Additional stages can be added in an obvious way to obtain even greater multiples of VI” The PIV rating of each diode in the circuit must be at least 2Vp volts.