Suppose we wish to produce an output voltage that equals the mathematical difference  two input signals, This operation can be pcrtunned by using the -ampli  dijfercntiol moue, where the signals arc connected through appropriate resistor networks to the inverting and noninverting terminals. Figure 14-5 shows the configuration. We can use the superpo ition principle to determine the output of this circuit. First, assume that V2 is shorted to ground. Then 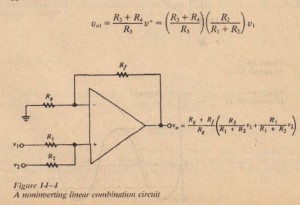 Assuming now that VI is shorted to ground, we have

Equation 14-12 shows that the output is proportional to the difference between scaled multiples of the inputs. To obtain the output

where A is a fixed constant, select the resistor values in accordance with the following:

Design an operational-amplifier circuit that will produce the output V” =O.Su, – 2V2. 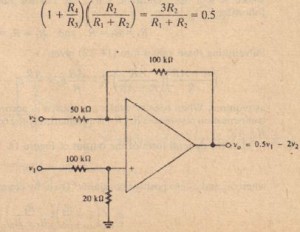 Although there are a large number of ways to choose resistor values to satisfy equation 14·-21, there may, in practice, be constraints on some of those choices imposed by’ other performance requirements. For example, RI may hay> to be a certain minimum value to provide adequate input resistance to the VI signal source. Recall, also, that the greater the closed-loop gain of a stage, the smaller its bandwidth. Thus it may be necessary to “distribute” gain over two stages, as is done in Figure14-8(b) to obtain 20u!, in order to increase the overall bandwidth. Finally, it may be necessary to minimize the gain of one stage or the other to reduce the effect of its input offset voltage. Note that the input offset voltage of the first stage is amplified by both stages.

The method used to design a subtractor circuit in Example 14-3 can be extended in an obvious way to the design of circuits that produce a linear combination of voltage sums and differences. The most general form of a linear combination is V” = ±alv\ ± a2u2’± a3VJ ± . ‘.. ± aI/v”. Remember that the input signal corresponding to any term that appears in the output with a positive sign must pass through two inverting stages.

1. Design an operational-amplifier circuit ‘using two inverting configurations to produce the output Vo”7 -lOUl + 5U2 + 0.5U3 ‘- 20U4’ ,
2. Assuming that the unity-gain frequency of each amplifier is 1 MHz, find the approximate, overall, closed-loop bandwidth of your solution. 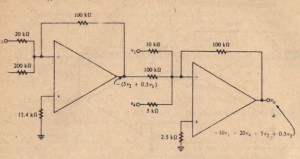