Waveshaping techniques arc widely used in function generators, frequency synthesizers, and synchronization circuits that require different waveforms having precisely the same frequency. In this section we will discuss just two waveshaping techniques, one employing an integrator and one employing a differentia tor. Recall that the output of an ideal integrator is a ramp voltage when its input
is a positive de level. Positive area accumulates under the input waveform as time passes, and the output rises, as shown in Figure 14-32. If the de level is suddenly made negative, and remains negative for an interval of time, then negative area accumulates, so the net area decreases and the output voltage begins to fall. At the point in time where the total accumulated negative area equals the previously accumulated positive area, the output reaches.

The basis for generating a triangular waveform using an integrator. When the input is a square wave that continually alternates between
positive and negative levels, the output rises and falls in synchronism. Note, that the slope of the output alternates between +E and – E volts/second.How a triangular wave is generated using a practical integrator. Figure 14- 33(b) shows the actual waveform generated. Notice that the figure reflects the phase inversion caused by the amplifier in that the output decreases when the input is  positive and increases when the input is negative. The average level (de component) of the output is 0, assuming no input offset. Note also that the slopes of the triangular wave are ±EIRIC volts/second, since the integrator gain is lIR1C. It is important to be able to predict these slopes to ensure !hat they will he within the specified slew rate of the amplifier. In the figure, T represents the period of the square wave, and it can be seen that the peak value of the triangular wave is Equation 14-65 shows that the amplitude of the triangular wave decreases with increasing frequency, since the period T decreases with frequency. On the other hand, the slopes aVlat are (contrary to expectation) independent of frequency.

This observation is explained by the fact that while an increase in frequency reduces the time at over which the voltage changes, it also reduces the total change in voltage. a V. The phenomenon is illustrated. 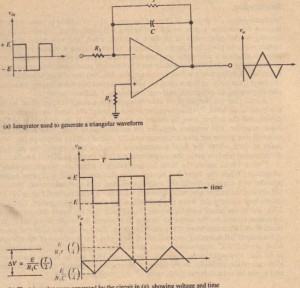 Equation 14-65 is a special case of a general relationship that can be »sed to find the integrator’s peak output when the input is any periodic w aveform symmetric about the horizontal axis:

For example, note that the positive area in one-half cycle of the square wave in Figure 14-33 is E(T/2), so (14-66) reduces to (14-65) in that case. Equations 14-65 and 14-66 are based on the assumption that there is no input offset level or de level in the input waveform. When there is an input de component, there will be an output de component given by

The integrator in Figure 14-35 is to be used to generate a triangular waveform from a 5OO-Hzsquare wave connected to its input. Suppose the square wave alternates between :t12 V.
1. What minimum slew rate should the amplifier have?
2. What maximum output voltage jshould the amplifier be capable of developing?
3. Repeat (2) if the dc component in the input is -0.2 V. (The square wave alternates between +11.8 V and -.12.2″V.)

Solution
1. The magnitude of the slope of the triangular waveform is 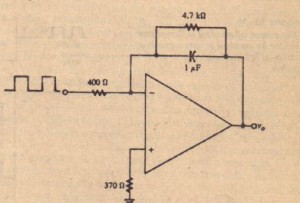 If it were possible to generate an ideal square wave, it would have zero rise and fall times and would therefore change at an infinite rate every time it switched from one level to the other. If this square wave were the input to an ideal differentiator, the output would be a series of extremely narrow (actually, zero-width) pulses with infinite heights, alternately positive and negative, as illustrated in Figure 14-36. These fictional, zero-width. infinite-height “spikes” arc called impulses. They have zero width because each change in the square wave occurs in zero time. and they have infinite height because the rate of ch~J\P,eof the square wave is·infinite at the points where changes occur. The negative impulses correspond to the negative rates of change when the square wave goes from a positive value to a negative value. Between the time points where the square wave changes, the rate of change is 0 and so is the output of the differentiator.

Of course, neither ideal square waves nor ideal ditferentiators exist. However, many real square waves have small rise and fall times and therefore have large rates of change at points where transitions in level occur. The output of a differentiator driven by such a square wave is therefore a series of narrow, high-amplitude .pulses. These are used in timing-circuit applications, where it is necessary to trigger some circuit action in synchronization with another waveform. Figure 14-37 shows 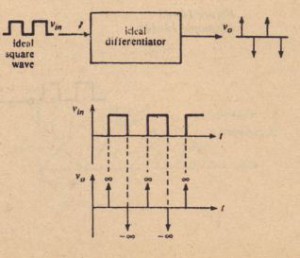 a somewhat idealized square wave in which the nonzero rise and fall times arc represented by ramps. The output that would result if this square wave were to drive an ideal diffcrentiator is also shown. Finally. the typical output of a practical differentiator is shown. Here, the output pulse is distorted (although still usable in timing circuits), because of the restricted bandw idth of a practical differentiator  and because of slew-rate limitations. Notice that de level in the input to a differentiator has no effect on till: output, because tilt! rate of change of a de’ component is o. From a circuit viewpoint. the input capacitor blocks de levels.

(The figure docs not show the phase inversion caused by the inverting amplifier.) Prom studying the ideal output in Figure 14-37, the reader should be able to deduce that an ideal diffcrcntiator driven by a triangular wave will produce a square wave. Since the output equals the rate of change of the input, the square wave will alternate between :!:(R,C)la volMI volts, where aVj At is the rate of change of the triangular input. Amplifier slew rate is a serious limitation in these waveshaping applications, because the differentiator output should theoretically have an infinite rate of change whenever the slope of the triangular input changes from positive to negative.